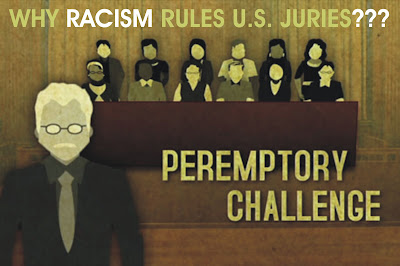 In a new study, referenced here, if there are no blacks on a jury, the chance of conviction of a black defendant increases by 16%, over a similar white defendant. The study also presents that having one black juror in the jury pool (not the actual jury) eliminates the disparity in verdicts. Okay - hmmmm? So, from the fairness standpoint, the question is what is at play in attaining that lone black juror in the pool to even up the chance at a fair verdict?

As a part-time trial consultant, I know that getting blacks into the jury process and onto actual juries is easier said than done. The first issue is one of jury pool selection, the greater starting group of people from which the petit jury (trial jury) is selected. Selection algorithms exclude blacks by virtue of the nature and quality of public records keeping upon which they depend. Second is attendance, whereby blacks who are selected will no-show at a rate often reaching 80%. Third and finally, there is the dastardly peremptory challenge, whereby attorneys get to exclude whatever blacks remain, without giving the judge any reason. It is here where racial stereotyping runs amok. For more on this go here (Race and Jury Selection).

The result - blacks are significantly absent, as jurors, from the judicial system, and more black defendants are convicted, than if they were white. My solution? It starts with requiring jury pools to be representative, including hitting no-shows in the pocketbook (tickets) along with driving restrictions. Tax rolls and refund check addresses are the most accurate and up-to-date point of contact. Also, juror compensation must take the economic penalty out of serving. Finally, we must eliminate the peremptory challenge, in the case where doing so would exclude a classification that was present in the initial jury pool (not just blacks). Challenge for cause would remain.

Having a slew of blacks on the O.J. jury didn't work out so well.

80% are no shows?
Remarkable.
So if they don't show by 80% then I wonder by what percentage they create other problems.

I wonder too how fair a trial George Zimmerman would get of there were one or two whites and the rest blacks.

So many issues. So many ways to look at these issues.

Not just the one favored way of making almost everything these days look racist.

Having a goup of whites didn't work well for Emmet Till and the countless blacks who have historically been denied justic.

I think that correlation is not causation. Having less Black means that there are also more neo CONS on the jury. NeoCons are more often White. Not all NeoCons are racists but all racists are neocons.

Personally, I'm just glad that I don't live in Florida, so that there is no chance I could be selected for the zimmerman jury. Anybody unlucky enough to sit on this thing is screwed either way.

Based on the recent testimony given by the investigator at the bond hearing and the newest injury photos, there simply isn't enough evidence to convict for murder. But when the jury either is hung or votes not guilty, the special prosecutors office will throw the jurors under the bus so as to deflect public anger off of them.

The best thing the jurors could do (for self preservation) would be to convict Zimmerman of a lesser charge and give him a slap on the wrist (like Casey Anthony).

So they should convict on a lesser charge not for the cause of truth and justice but for self preservation?

Even if there is no cause for the lesser charge conviction?

That is NOT justice.

You've got this one backwards. Having at least black person on the jury makes it far more likely that the blacks will jury nullify to let a brother walk.

Get something straight about white people: We hate criminals. Black, white, green, whatever we want them to burn. Only the black community is fine with criminals as long as they share the same skin color.