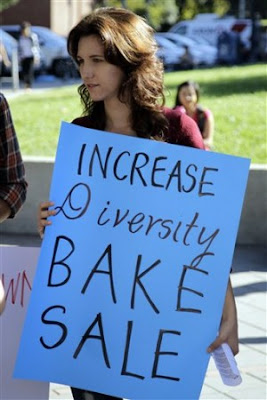 Just yesterday, the UC Berkeley College Republicans (UCBCR), with the support of fellow Republicans from nearby schools, and Prop. 209-advocate and former UC Regent Ward Connerly, conducted a satirical “increase diversity bake sale”, whereby white men were charged $2 for a cup cake, while Asian men paid $1.50, Latino men $1, and black men $.75. Women paid $.25 less than the comparable male price. Three-hundred cupcakes were sold (out). (here) The UCBCR was attempting to draw attention to SB 185, which they feel might water-down the earlier Prop 209, banning affirmative action in college admissions.

A friend who works near the campus responded, ‘that’s so racist’, wherein I said, ‘it’s not racist, just really stupid’. In fact, these bake-sale events are not new to campus Republicans, and seem a vital part of learning the art of not-persuading-anybody-about-anything, as practiced by the group’s leaders/mentors. I have yet to see mocking-your-adversary as an effective tool of argument/persuasion, but the Republicans keep sticking to it, all the way to DC.

The counter-response/protest, by the UC Student Association, was a ‘die-in’, where a bunch of non-sympathizing students wore black clothes and played-dead near the bake sale. This seems a little stupid, as well. Why not counter with a ‘Walgreens’ sale, wherein white males pay $.75, Asians $1, Latinos $1.50, and Blacks $2, for a tube of toothpaste, depending on their suburban/urban store location. Now debate them apples, kiddies!

UC Berkeley?, the number one public institution of higher learning in the US? Makes one wonder about admissions across-the-board, don’t it?

When I lived in New England, first to attend Harvard, and then to work, I experienced my introduction to white-looking blacks, who were NOT passing for white. While they would certainly be mistaken for white by most blacks and whites, they made identification as black easy by their conspicuous attendance at all-black events, before you ever knew their history or heard them speak of it.

Unlike passing blacks, these white-skinned blacks, for lack of a better description, are very proud of their black history, some of which dates back even prior to the Mayflower. These ‘white-blacks’ clearly have predominantly Caucasian genetic background, but due to the laws of the day and circumstances, were classified as black and lived their lives as such. They worked as blacks, attended church and school as blacks, and were often (but not always) segregated from opportunities afforded whites. As you would expect, some white-blacks used their white-features to elevate themselves above pigmented blacks, but this author suspects that this elevation is a more common occurrence with traditional light-skinned blacks.

On one occasion, a dear Bostonian friend from a prominent Washington DC family invited me to accompany her on a visit with the grown daughters of a childhood friend. The home of one of the girls resembled typical collegial-Cambridge, white Cambridge that is. Blonde hair and blue eyes were everywhere, especially the children. But something did not seem ‘right’. Everyone was so at ease with my friend’s black-related activities, including the black stranger - me. In the car after we had departed my friend abruptly says, “I know what you are thinking, and the answer is yes, those people are black.” Wow! Did not see that one coming! (I secretly think this smart woman was purposely padding my worldly education, an activity she graciously has repeated to this day.)