Who Is Going To Shoot Obama? 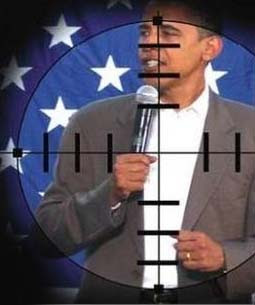 "At Rep. Paul Broun’s town hall meeting on Tuesday, the Athens congressman asked who had driven the farthest to be there and let the winner ask the first question.
We couldn’t hear the question in the back of the packed Oglethorpe County Commission chamber, but whatever it was, it got a big laugh. According to an outraged commenter on the article, the question was, when is someone going to shoot Obama?"

Broun's response, "The thing is, I know there’s a lot of frustration with this president. We’re going to have an election next year. Hopefully, we’ll elect somebody that’s going to be a conservative, limited-government president that will take a smaller, who will sign a bill to repeal and replace Obamacare."

My reaction. With this type of public urging and tacit support by our so-called leaders, it is only a matter of time before some nut-job tries to kill the president, and our weakening grasp on democracy. It is reasonable to disagree with the president, but it is patently un-democratic, un-patriotic, and un-American (not to mention illegal) to entertain ANY notion of his assassination. When such displays become acceptable, as they seem to be, that crazy guy wearing that 'the end is near placard' is not seeming so crazy after all.

Judge Rules White Girl Will Be Tried As Black Adult

Some of you may remember when a young white female shot a bullet into my apartment (here) only to ultimately get a pass on the felony charge of recklessly discharging a firearm. I believed her 'walk' on the charge would have never happened had she been black or Latino. This youtube bit by the Onion News Network may qualify as satire, but I found it very life-like pertaining to considerations to give justice a kick in the pants. 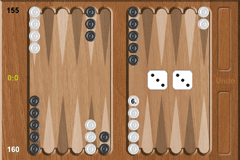 I just picked-up the new iPhone from Apple. One of the apps I bought was backgammon for an amazing $.99. I played a lot of this in college many years ago, but what struck me was not how great the gadget is (indeed it is), but rather that this particular game (not made by Apple BTW) cheats like a SOB. I am a software developer and a life-long student of probability. Eight times out of ten the roll of the dice that the computer-as-opponent needs to advance, it gets. Double sixes in a row, right when I’m about to finally win a game - WTF! I am getting my ass kicked. Herein lies a lesson for black folks. Cheating is an integral part of human nature, expressed in games or anything else, and confronting it smartly is critical to competitiveness.

Present-day blacks behave as though they do not understand cheating. The group responds to it very poorly, and practices it even more poorly - with disastrous results. Black slave ancestors would be appalled how their kin have errantly placed so much of their faith in the legal system, and lost their guile and cunning for outsmarting others. Sometimes it seems that everyone, except blacks, understand that laws and cheating walk hand-in-hand. Alternately, when today’s blacks break the rules, they too often take pleasure in doing it in plain, kiss-my-butt, sight of the authorities, making conviction, and punishment inevitable. Again, ancestors would shake their heads in wonderment.

When my backgammon strategy adjusted to take into account the cheating nature of my micro-processing opponent, I immediately began winning. The program continues to roll suspicious combinations, but rather than getting upset and calling Rev. Inc., I think about additional adjustments to my approach in order to confound the little bastard’s cheating heart. Right now, I still lose more than I win, but I have only had the game for a week and I already see how this is going to end.

Let’s be clear, I do not practice or advocate cheating, and the game maker may have simply wanted a challenging interaction, but laden herein is the lesson that cheating is a fact of life. Furthermore, we must each factor cheating adversaries into our game plan for achievement, or prepare for the short-end. Finally, no legal system, including one as good as ours, can match the cheating nature of humans, so expecting the law to deliver predictable, consistent, and fair results is simply not realistic. I think it is time for a different approach.

Over at Booker Rising (here) a commenter tossed forth another ad presenting a cut on black relationship dynamics. I thought it was good, although others disliked it, similar to the Pepsi spot (here). Note that in the SF spot the first black woman is both pretty and an alpha - showing they are not mutually exclusive.

Where to start? This SuperBowl ad was trying to 'keep it real' about sex and race. It plays up stereotypes for their shortcut accuracy, however biting. While it features a black woman and man, along with white woman, the director was probably a white man, so it really has everything. Here are my top ten thoughts:

1. The wife is big, but not too big. Ding! Correct. Black women lead the nation in big bones.

2. The wife is wearing an obviously purchased and unnatural hairpiece. Ding! Correct. Again, black women lead in this category.

3. The wife is the alpha in the relationship - Ding. Correct. Black woman are alphas, period.

4. The husband is timid. Ding! Correct. Timidity is too often and sadly the mark of a successfully married black man. Scratch that, ANY man! (Clarification - successful marriage to any alpha requires, how do we say, accommodation skills)

5. The white woman is looking after her looks and health. Ding! Correct. White women lead in active life styles.

6. The husband acknowledges another woman, who is prettier, in his wife's presence. Gong! Never happen. Dude would not have not made it this far.

7. The white woman flirts, ignoring the obvious danger. Ding! Correct again. I have witnessed this over and over. Just what was she thinking?

8. The black woman reacts violently. Ding. The stats back this up.

9. The ending. Gong! Wrong. Wrong. Wrong. Here is where the assumed white male director intervened. Instead of the cowardly hit and run ending, timid black man would have rendered aid and feisty black woman would not have said 'sorry' to the flirting runner, but would have also demanded silly husband make sure silly white woman was okay.

10. Of course, I could be all wrong. Remember, it is Friday.

Perhaps I'm just weird, but I could not turn this video off! It reminded me of the Larry Bird/Magic Johnson faux trick shot competition commercials. UConn 'real deal' Johnny McEntee's hand-eye coordination must put him in the top 99.99 percentile, and therefore, it is worth witnessing (IMHO). Enjoy - or skip it (if 1-in-a-million bio-mechanics holds no allure).

Just in case you have not seen it, the Houston Police went all "Rodney" on a young black suspect nine months ago. The media and the public did not know what happened until a few days ago when a judge ordered the released of the tape of the 'stomping' incident.

Although the fifteen year-old (at the time) definitely was attempting to elude the officers, he also clearly surrendered, laying on his stomach with his hands behind his head, before anyone touched him. In Houston, as in the King case, this positioning is clearly aggressive and taunting, such that a boatload of officers were compelled to punch and kick the living hell out of the handcuffed lad. Kind of reminds me of hyenas. And the kid, who needed to learn a lessen, instead gets one even more ruinous - just where is Mr. King anyway?

See for yourself before another judge pulls back the video. 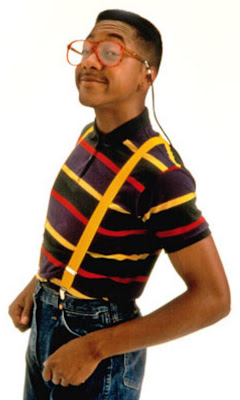 In a recent weekend conversation with my fifteen-year old son, we got onto the subject of how people are easily led to believe that which is not true. It is human nature, the lazy part at least, that has us grab the handiest explanation for things, even when a little applied brainpower tells us something different. He presented an interesting example of his understanding.

The black kids at his predominantly white, Jesuit (Catholic) high school accuse him of having a ‘white’ name, to go with his sounding white (english diction-wise). I recalled the names of his black friends as containing more than a smattering of Jaamals, DeShawns, and the like. He added that he was glad his mother and I didn’t give him a similar ‘black’ name. Man, my head hurts. I thought this ‘acting white’ thing might play itself out. Wrong.

It is bad enough that too many black parents saddle their kids with names that will forever attach them to ghetto images, regardless of where they actually start or what they achieve. Now, not having one of these ‘ghetto fabulous’ names can identify a person as less ethnically authentic (to some), at least in name, right out of the gate. More accurately, the kids are saying that new parents not only act black, but also act white, in how they choose to name their children.

For the record, my son is named for his maternal grandfather’s favorite city in his home state of Texas. Not surprising, this connection to his departed grandpa brought a smile to the boy’s face, that only emphasized the point of how easily his black classmates had led themselves astray, in what his name says and does not say.