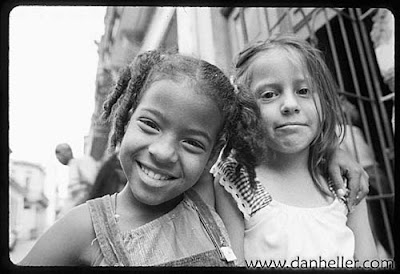 We see terrible HD visuals everyday to the point of numbness. But then again on very rare occasions we get lucky and spot something so beautiful and real that we freeze ‘alive’ in our tracks. This happened to me this past Sunday, after my workout. I was not delirious, even though 50 minutes of standing intervals on a spin bike, breathing only through the nostrils, is known to make one tipsy. I was actually sitting in the open jacuzzi when two five year old girls cautiously edged into the water.

All the adults present, both men and women, saw it at the same time. One girl was very dark-skinned, with the clearest brown doe-eyes, and the thickest long dreadlocks – not the kind you buy over the counter. The other girl was flawlessly-pale white, with long blond hair, bleached in streaks only by the sun, and with the bluest of blue eyes. The two were glued to each other in the way only little girls know how to do – they moved as one. My first thought, who's got a camera? Then I remembered, CAMERAS NOT ALLOWED! Damn!

These little ladies were apprehensive to the stir they created in the adults, who just earlier were happy to simmer aging muscles quietly in the 100 degree bubbling pool. Each grown-up took their turn dropping verbal wonderment onto the two. When it was my turn, all I could say was that they made a perfect post card, as I framed them with my hands. At this gesture, the two smiled in unison toward me such that I relived that rare and speechless first moment when my own daughter was born. Just totally amazing.

Don’t tell me we can’t do way more than get along, if we try. No better motivation than those two darlings, and all the rest.

How Lovely! This reminds me of my own best friend from childhood. I am of Hispanic and black origin but my skin is very light. As a child we lived in a predominantly black working class neighborhood and my best friend was black. We spent after school hours and summers together and were inseparable. Her name was Linda McDonald and I would love to be able to find see again!

Glad that brought you a bit of heavenly bliss...ahh, racial harmony!

Cute!! but not uncommon in this culture, since in many families, the're mixed marriages between blacks whites asians, etc. and many get together for Christmas--i've seen it all the time

They haven't been culturally indoctrinated yet.

i don't if this website is based in the US, but over here in the UK we mix very well. our neighborhoods are very multi-cultural, mixed race people have increased.

I'm Caribbean and my hubby is Irish we have 7 kids (maashaAllaah) and there are loads of families I know that are mixed.