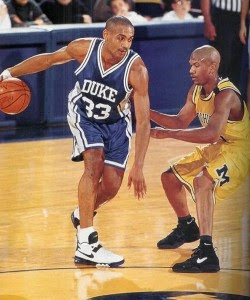 With all the earthquake/tsunami/nuclear calamity going on in Japan, I nearly missed the face-off between the black social classes, as represented by professional basketball superstars, Jalen Rose, representing Michigan and the underprivileged, and Grant Hill, playing for team Duke and the bourgeois. Who would have thought there could still be such odds within the black community, but here it is.

It seems that Mr. Rose produced an ESPN documentary that included waxing on how he and other Michigan “Fab Five” players thought black players on rival Duke, including Mr. Hill, were ‘Uncle Toms’ and ‘bitches’. Mr. Rose is clear in saying he resented the middle-class, intact family origins of Hill and others, sought out by elite Duke, and Coach K (Mike Krzyzewski). I’m sure Jalen Rose was not the only black nineteen year old from the ghetto to ever harbor animosity toward those of greater privilege, and Mr. Hill should understand that the best defense to the accusation of 'elitism' is no defense. The NYTimes is not the medium to show that you missed the salient point, however poorly emphasized.

Jalen, for his part, still clearly has some growing up to do. His cinematic efforts leave murky his personal developments about blacks like Mr. Hill, rather than making it clear that what he thought at nineteen was then, and now he is a grown man who knows better. Weak attempts at apology and explanation, after the fact, cannot erase the sting that Mr. Hill felt through Rose’s on-screen denigrations.

More importantly, these highly-paid athletes serve up the rarely discussed issue of class, within race, in black America. These discussions are more typically punctuated with name-calling, minus any supporting discussion. I hope that some good will come of it, as both men seem to have positive contributions that extend beyond the basketball court.

Rose's point of view just highlights what many others think - that;
White=Good
Black=Ghetto.

Why is "Acting White" even understood?

Class-based differenes have always been present in the black community, and have been seen historically in clashes between prominent personalities- like the dark-skinned 'proletarian' Marcus Garvey versus the light-skinned patrician W.E.B. Dubois. See Ron Christie';s book- 'Acting White".

Blackmen like Jalen Rose are killing us in so many ways. When did it become cool for black people to be uneducated? When did it become cool for blackmen to be unable to think and articulate their thoughts and beliefs in relation to others? Uneducated black people end up being a statistic in this country, the facts speak for themselves. Yes, some educated blacks have a stick up their butt, and yes, some of them turn their back on the black community in order to be liked by whites and others, but, their racial insecurity is not an excuse for black people in the hood to be puppets for the system. Black athletes are the most exploited group of blackmen in the country other than black criminals...NCAA,NFL,NBA,ESPN,FOX SPORTS,AGENTS,LAWYERS,GROUPIES,etc. They can't talk smack about educated black people, when many of them don't have college degrees themselves. Jalen Rose is an example of why I've lost respect for most black male athletes.