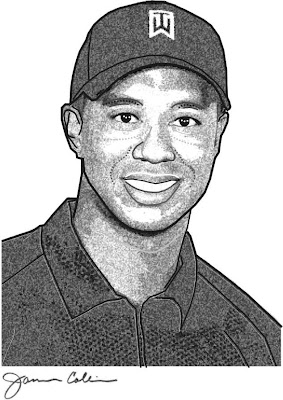 I like Tiger Woods, not because I know the man or play golf, but because he picked up where Lee Elder left off – showing the world something it did not quite realize, that it was possible for a black man (an Asian too) to play golf as well or better than whites. I do not know what Woods calls himself these days, and do not really care, because long ago he became just Tiger, and ceased being someone that anyone, except his parents, could fully claim. As a sportsman, he is an enigma, an unexplained phenomenon, regardless of and beyond race. I view Muhammad Ali in the same vein.

Tiger now lives in a bottle. Of course, his bottle includes multi-million dollar contracts, palatial homes, yachts, and paparazzi, but it is a bottle nonetheless. Everything he does, or does not do, has exaggerated meaning. Even so, that meaning, good and bad, is going to nearly always go beyond what the man inside the enigma ever imagined, as this is his life. And let us not forget that professional golfers and their business (the men at least) have the well-earned reputation of immature behavior. And this is why I think he tries to keep a low profile.

He is reserved in the face of stupid remarks because they are a daily staple to his existence, from the sea of gallery faces he has no choice but to ignore. With certainty, he has come to realize that his words can do far more damage to others than theirs to him. Perhaps his most looming daily chore is producing measured responses that do not unduly ‘erase’ other people’s lives, or harm his own. With a single utterance he can be judge, jury, and executioner. Who wants that?

Now the ‘lynch’ comment aimed at Tiger by the moronic golf announcer undoubtedly struck blacks like a dagger. And maybe the culprit got off with too light a punishment as well. But, I do not think it is best for Tiger, or the people who claim him, to force a role for which he is unsuited, at least today. Golfing skill is not an apprenticeship for any kind of leadership I know of.

Tiger has always answered challenges, the way his father taught him, by kicking ass on the course. He allows nothing to distract him, specifically words, and this is his secret, whether it suits us or not. The world can take care of itself, as I have seen, and perhaps we should grant him the reward, or at least the understanding, as the protégé of Woods Sr., of staying focused and fighting his battles with club in hand.

I agree. I tire of us granting a "blackness" litmus test to every black celebrity. Like if they aren't "angry" enough to "tell the white man the truth to his face" then they aren't "real".

Not everyone reacts the same way and as you said, we all aren't suited to be leaders in the same way. What was Tiger supposed to do about the comment? Say "see? that's what these crackers do!" and jab his fist in the air. His best course of action was to ignore it and that's what he did.

As you said, he does his talking on the course

I agree with everything you wrote about Tiger too. It's NOT my concern what he calls himself either. I know one thing he's a HUMAN BEING though! : ) From what I understand he's also NEVER denied being part African-American. It's also true that both he and his wife are definitely constantly under the media spotlight. That can't be easy I don't care how much money you have!!!!! What I TRULY appreciate about Tiger is that he is ALWAYS trying to be a good example to ALL children. Therefore, I understood his reaction to the "lynching" comments. Finally, YES he does need to FOCUS on what it is he does best - WINNING!! It's great he's NOT letting these diversions get in his way.

My only issue with Tiger is: Do you get to tell people its enough when you dont participate in the discussion to begin with?

What you said about Tiger makes sense - not everyone is born to be a leader and he certainly is only capable of leading on the golf course. However, when I read this, my first thought was, "Of course Tiger wouldn't be offended." Some years ago on Oprah, Tiger Woods said he wasn't actually "black" at all -- he was "Cablinasian." When he was asked if it bothered him to be called an African-American. "It does," he said. "Growing up, I came up with this name: I'm a 'Cablinasian.'" As in Caucasian-black-Indian-Asian. So since he doesn't consider himself black why would he be offended?

Regardless of how Mr.Cablinasian feels, the remark was still inappropriate. Why should a golf commentator be making racially motivated statements/jokes? She deserved to be suspended. That should've been the furthest thing from her mind. What was she thinking?

Lots of people are saying that she meant nothing by it but if she made a 'joke' about some other ethnic group none of them would be condoning it and defending her.