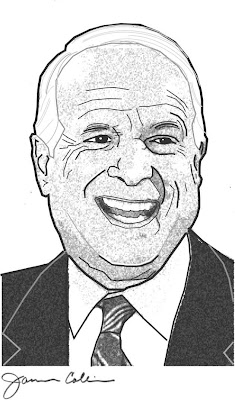 While the Democratic candidates for president play the race contest of who is the most inclusive or who has done the most to further race relations, the Republicans are gearing up for a very different game of race politics. If the future is anything like the past, the GOP slate will be slinging barbs of who can be entrusted to uphold the traditional battle lines, including race.

On the eve of the Republican primary in S. Carolina, John McCain is hearing familiar footsteps of his alleged illegitimate black daughter. It seems that in 2000, Bush supporters effectively used this accusation against him, and now that familiar slander has been dusted off and toss onto the bandwagon. Of course McCain’s strategy is not to tell these bigots to go to hell, but rather to ‘explain’ that the child in question is his adopted daughter who just happens to be darker than mom and dad due to being a Bangladeshi orphan of Mother Theresa.

As for the on-going confederate flag flap, McCain has tried to avoid being road-kill this time around. In 2000, he was against the ‘symbol-of-hate’ flag but blinked in a moment of intestinal weakness. His Arizona background failed to warn him that southerners hate wishy-washy bigots as mush as staunch negra-lovers. So this year he is following the worn footsteps of SC’s governor in saying the flag should be in the background. Maybe he’s sure this time around.

Moving along, McCain has declared that the president should be a Christian, that tax cuts for the rich are good, that he was not a favored POW of the Vietnamese, and his wife is not a drug addict. More dirt, but with power washer in hand, he is expecting all this ugliness to come and get blasted clean.

And some Republicans wonder why blacks are so easily mesmerized and held captive by the Dems.