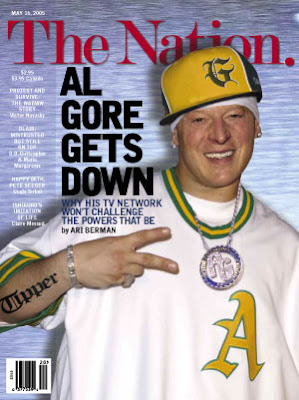 Let’s suppose that it is the 2004 presidential election and Al Gore is not white, but rather he is black and challenging history to become the first of his kind to hold the highest office. Let’s also recall that the actual election was, at its conclusion, shrouded in accusations of fraud and manipulation, with people on all sides very wedgied-out.

As it was, once actual anomalies were revealed, a time-out was called, an investigation was put in place, and a remedy identified and pursued, representing due process under this country’s laws. Now this does not mean that a just result was achieved, but rather only that an orderly, controlled set of events delivered the population to an outcome that they were willing to accept, most notably the white Mr. Gore himself.

Now had Mr. Gore been black, let’s consider what might have happened, informed by Newark, Detroit, Miami, and Rodney King’s LA. With the black Mr. Gore pleading for calm (or maybe not) black people may have very well reacted consistently with the past and their Nairobi brethren and ‘burn this m-f down’. Undoubtedly, they would have started this disobedience from the inside out, in their own neighborhoods, and mixing in many personal-scores-in-wait of being settled. The police, National Guard, and US military would have worked to contain this uprising, with the end result being many black fatalities and burned out black communities, along with a bunch of very scared white folks.

Now part one of this thread attempted to describe blogger Goldberg as a racist for proposing that blacks, this election, will riot if Mr. Obama is defeated, presumably by fair means. I stand by my declaration. However, I propose that where we should be concerned is if blacks perceive defeat of Obama by illegal means. The promise of due process to urban America, as in Kenya, is less effective at holding back people, where their subscription to the rule of law is less developed, and further antagonized by unequal protection.

I must say I fail to say the connection between the Kenyan riots and American racism.

Of course, to me how our country's image and situation is contextualised and interprated oversees is an issue beyond skin colour. It doesn't matter who presents innacuracies- whether they are black or white: an innacuracy is an innacuracy.

By the way, Kwani? a Nairobi based journal that I work for is publishing a blog with the thoughts of Kenyan writers on the recent post election crisis in Kenya.

Kibaki was elected on a reform ticket 5 years ago after the 24 year reign of a dictator who regularly rigged elections. He was supposed to be the countries first opportunity to escape tribalism and corruption. His refusal to give up power after the election was taken badly because the people had hoped for a real election. The history and political realities of Kenyans and African Americans are to different to make anything but a superficial comparison between the two groups. I don't always agree with you but I tend to enjoy your posts and respect your reasoning. I say this with as much respect as possible, I think you really need to take some time and research the Kenyan situation and the countries history.

Homelandcolors: I appreciate your effort, as it seems that in your view I have incomprehensibly aligned, and perhaps maligned, the behavior of the Kenyans and Black America. I mean no disrespect to either. I will say again, for my interest it is not so much about that which ignites the 'flame', but rather how the flame burns. Blacks and Africans kill each other at rates that reflect a similar adherence/ignorance to the rule of law, despite very different external influences. I believe the empirical evidence supports a social evolution pathology at play that reaches back thousands of years. Understanding black willingness, including the Africans, to devalue lives represents a critical look into understanding black-on-black crime in America, and our soaring black prison population. My blog vector may be different, but I do not see it as illogical/unfair.

We might just have to agree to disagree on this one, keep the posts coming.