Acting White: Obama Takes S. Carolina – So What Does It Mean? 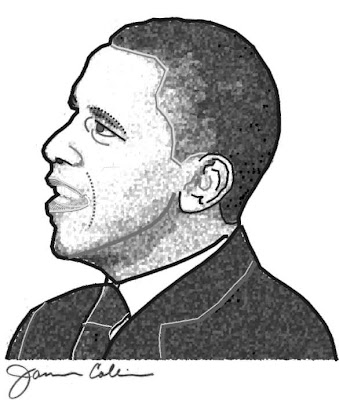 It remains to be seen if Obama can beat Clinton, in the sprint to the White House. The only people who may know are the 80%, or so, black voters in S. Carolina and they are not talking.

I say they know because they either voted for Barack because they have studied his ‘platform’ and believe, along with many whites, that he can best lead this country - or more realistically, they turned out in record numbers simply because he is black, and not merely pretending to sleep with a fake black ex-president spouse (who shall not be named).

These elections are a great window into the state of race in America, where proud moments reflecting advancement are rare. My fear, with all my studies, is that while black voters, dreaming of a ‘first’, motivate themselves to the polls, the analog to this is whites remembering to vote their color (gender too), once they are within the privacy of the ballot booth.

If my skepticism is correct, Obama and his true supporters are in for a rough ride as the race/gender-cards go flying out of the Clinton campaign. But be clear, all of America will share equally in whatever morass this country continues to spiral towards, due to our intractable ‘with all due speed (meaning s-l-o-w)’ behavior around advancing the content of character, ahead of skin color.

I hope that I am wrong.

Appreciate your thoughts and for sharing them. Unfortunately, I think you are all too right regarding this.

Your hopes are realized. You are wrong.
Why do you assumr proplr vote for Obama solely based on their common race? I think you must either have another candidate you'd prefer, or you're just acting stupid and acting white.

I definitely think you grossly oversimplified the voting behind Obama's win. If that's the SOLE reason, why didn't Al Sharpton pull off a similar victory in 2004?

CNN caught a lot of flak for running a story about black women choosing between Clinton or Obama.

I believe you're making the same mistake, breaking down people's voting choices to gender and race. If that's really the case, why isn't Jon Edwards dominating the field? He's the only candidate for white males by the criteria.

When participation jumps dramatically, as when Jesse Jackson first ran, the primary motivation was about supporting 'the race', by supporting a black man. I'm just saying that this is a double-edged sword. It gives more leverage to those, like the Clintons, who will undoubtedly look to use the race/gender card to mount a defense to Obama.

When President Bush was reelected in 2004, someone told me his reign would serve to shift the American consciousness a lot more quickly than if someone like Kerry were elected, meaning Bush would do so much damage to America that people would begin to wake up. Four years later, Barak Obama is riding his campaign on the winds of “change” and “hope”; today he was blessed by Camelot (the Kennedys). Perhaps in the end the “old guard” will keep him out of the White House, but don’t count him out so easily. When a “mood” overtakes a country, it’s a powerful force like nature.

"These elections are a great window into the state of race in America, where proud moments reflecting advancement are rare. My fear, with all my studies, is that while black voters, dreaming of a ‘first’, motivate themselves to the polls, the analog to this is whites remembering to vote their color (gender too), once they are within the privacy of the ballot booth."

I don't think that is a real world problem. Iowa and New Hampshire have very small black populations, so most of the votes Obama garnered there,(and he garnered a lot of 'em) were white votes. Obama is a compelling candidate, young, good speaker, good on issues, tall and good looking, honest, nice guy who any of us would be pleased to have over to our house. All these are good reasons to vote for him. If, just for frosting on the cake, I happened to share skin color with him, that's one more reason to vote for him. I don't see anything wrong with that. Not to fear. I think Obama has a decent chance of obtaining the nomination, and following that victory, a decent chance to defeat the Republicans.

Like you, I believe that when all is said and done, no small number of people... despite the words of theri mouths, will go into the voting booth and vote based on race/gender.

This isnt based on guesses or suppositions, as I know several women who plan to vote for Clinton, simply out of gender solidarity.

This is going to be an interesting race.

With all his might, Obama has been trying to fight against Billary's efforts to sum him as simply "The Black Candidate," I'm sure in some part, to prevent the race-based voting phenomena that you predict.

I think one step forward in this effort was his performance in last night's debate where he continually turned the focus to one outstanding fact - that he would stand a better chance against the republicans in the general elections. I think if intelligent white voters take that into consideration, that will trump racial allegiances on Super Tuesday.