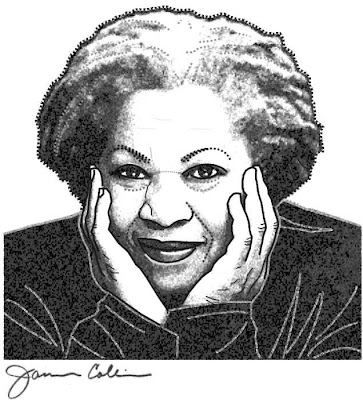 In general, I have never been too much for symbolism. But it does have its place when we start talking about how we move millions of people from whatever dime they are on, to some other hopefully better dime. In the case of the upcoming election, neither the Democrats nor the Republicans are that far from their respective opponents in offering promises they will not be able to keep, so the election falls to foreground symbols and hopefulness.

Today, two notable women, Caroline Kennedy and Toni Morrison (pictured), turned some serious symbolic heat on Senator Clinton. Caroline, easily the classiest of the Kennedy’s, did what only she can do, compared Barack to the image of her father – an airbrushed image for certain, but still an arrow with some wood behind it. Morrison, who errantly anointed Bill the ‘first black president’, revoked his title with a level of articulation we damn-well should expect from an award-winning writer.

To top it off, Senator Ted slipped in behind niece Kennedy and added his own emphasis, after scolding 'Bubba' on his down and dirty race-card antics. Now Ted has his own issues, but the question of where to stand on this one was easy, once Caroline began her move to the basket.

Now tomorrow is a new day, and the grounds around Hopeville hold many underestimating, over-confident, stopped-dead in their tracks, Clinton-foes. But, as my young son would say, today was ‘sweeeeeeeeet’, nonetheless.

Inspired by your article, I decided it would be prudent to get a firsthand look at Hopeville last night. After 30 minutes parked in a three-mile backup, I heard on the radio that the sheriff's department was turning traffic away. This prompted me to e-mail the local Democratic party: "Did you really think the gym at the local community college would suffice [for Senator Obama]?" Nevertheless, I came; I saw. The urban sprawl in Hopeville is ginormous.