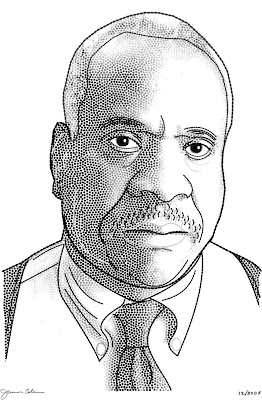 Supreme Court Justice Clarence Thomas asked his fellow jurists to stand behind his grudge match with Obama, regarding the president-elect's citizenship, and they promptly batted his flatted-footed, no-spin, no-arc, no-chance-in-hell shot into the nose-bleed seats. This is a man who likes humiliation.

Now I understand if Thomas is not excited about Obama's win, as they are ideological opposites. I also understand that it stung Thomas to have Obama tell the world, during the election, that as a jurist Clarence did not have the 'game' to sit on the high court. But hey, with Harvard Law, Law Review, Constitution scholar-chops on his resume, Obama has as qualified an opinion as we are going to find among politicians. Perhaps it is the weight behind Obama's jabs that motivated this flailing. Regardless, Thomas needs to retake his seat and go back to being seen, and not heard.

If ever there was a man who did not know how declare victory (18 years ago) and move on, it is Thomas. He has proved his GHWBush AA appointee status time and time again, by his inability to distinguish himself, and he knows it. In all his years on the court he has gained neither the respect of his adversaries nor his fellow conservative justices. At best, he is tolerated as water-boy for the far right (stare decisis). Sitting mute, day after day, he has only cemented himself as the worse-case scenario of affirmative action - where an undeserving person is arbitrarily gifted a tenured position. He lets the others do the heavy lifting. Having a voice and getting challenged is part of the job Clarence, for god sakes! I suspect he fears being embarrassed in public, and he is probably right. It's that unscripted legal banter that threatens, to this day, to expose Thomas as a legal lightweight. Recall how well Sara Palin was considered until she actually spoke in public without a script.

Yet again, with this latest ill-advised move against Obama, Thomas has opened himself to disdain, open-faced and hidden, from all quarters.

CT is mad because he thought that he did it the right way. Now BO comes along and does it even better.
CT is a dog pissing on a tree.

He is married to a white women...sorry that is not a ticket to being a white male.

Interesting point about speaking without a script. Obama himself hems and haws quite a bit when the teleprompter is absent. Speech writers do wonders for mediocre minds.

Obama might have needed his affirmative action and Harvard grade inflation and tokenism, but Thomas didn't.

You can paint a narrative in a thousand ways. Try not to get too caught up in one particular.

How can you question a man's intelligence without talking with him? Did you even read his autobiography?

Your attack on Clarence Thomas is unfortunate and indicates an insecurity. I guess, like Obama assumed at Saddleback Church, you have to publicly humiliate a non-conformist African American to keep your "cred."

By the way I did a search on "Thomas Sowell" on your blog and it came up empty...I wonder why? Feel free to take him down too since he is obviously a sellout.

Anon 4:20, I don't question CT's intelligence, but rather his qualification for the high court - he was weak by all standards, ideology aside.
As for Sowell, his books have merit, while his day-to-day editorial is compromised by a need to please his conservative benefactors.

Mr Collier :
I agree with you about Sowell's output. I have appreciated very much a lot of his books where he comes across as an extremely thoughtful, insightful man , especially on the ethnic questions. When one reads his columns on townhall.com for instance, one wonders if it's the same thomas sowell ! The townhall.com Sowell is nothing but a partisan hack.

I dunno. I heard Justice Thomas on the radio with Laura Ingraham and he sounded thoughtful, intelligent and (gee I sound like Joe Biden) had a good sense of humor. Which was surprising to me given the almost universal contempt he is held in in The Popular Culture.
On a related note, I think Gov. Palin would have come across much better if the media (Yes, you Charlie Gibson) had subjected her to the same kind of fawning softball questions that they asked of He Who Sends A Thrill Up My Leg When He Speaks...

Holden: Palin clearly had better luck talking to certain people, not the media, I will agree. A vocal Thomas on the Court, on the otherhand, would be going toe-to-toe with lawyers, not journalists (you mention), and who are capable of revealing dearly his shortcomings as a jurist.

Judge Thomas is intelligent and I believe he is qualified for his position, but I am more concerned about Thomas' mental state. After reading his book, My Grandfather's Son, I soon realized that he was an angry black man who always beleived that he had to prove himself to whites on some level. In his book he states that one of his most haunting moments was when another student (who was white) wrote one day you'll be as good as we are. He has been on this senseless journey trying to prove that "He is not that type of negro." Many people like Judge Thomas are angry because President Elect Obama remained true to himself without believing that he had to change or to prove himself to white America. Look at Him....