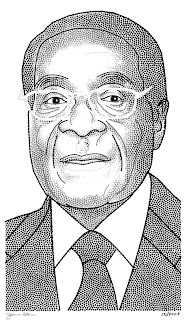 No single factor of development is more influential than the status of the 'rule of law' in a given society. Africa, as a region, continues it's lock on last place among humanity, when it comes to employing this evolutionary requirement of advancement. Robert Mugabe's terrorist reign over Zimbabwe is the best example of continued tragedy under the weight of near-contagious tribalism.

Despite the common rhetoric that Africa suffers its current plight due to the exploits of colonialism, the entrenched nature of the continent's problems simply does not bear this out. In fact, it was slowed development, in the thousands of years before whites ever returned, that made Africans vulnerable to takeover. Once the white captors were expelled, Africans simply returned to tribal ways, now cloaked in the left-over trappings of democracy. White people may be faulted for taking advantage, but the original slower progress resides with the place and it's inhabitants, and today's tyrants can point at no one but themselves.

Only through placing responsibility where it rightfully belongs, and in the right amounts, will outsiders ever be able to truly help Africa. Regardless of who is exploiting them, they are victims of themselves. The democratic leaders of Africa, especially southern Africa, must part company with liberators-turned-thugs, like Mugabe. He has replaced one form of tyranny with another, his own, and the people are worse-off.

Thats kinda heavy bro! I ain't mad at your assessment either cause i have many beefs with the politics of motherland myself. (see lamumba for instance) not to mention all of the assorted forms of genocide.

still whatever they were doing before white folks came ravishing the land and exploting the people -though it were tribal it was theirs. i wish they were left alone at least.

I think it would be very interesting for someone to do a study as to how America and Africa might be today if slavery had never come into being.

Africa would be like it is now but with fewer people. The US would have a hell of a lower crime rate.

Interesting. I agree--mostly. While colonialism was absolutely brutal and devastating in many parts of Africa, it wasn't as though the Motherland was Eden before the Europeans arrived.

I recently wrote a post about Mugabe and why I think he won't leave. You might find it interesting.

Mr.Collier, as a Ugandan immigrant turned naturalized citizen who has lived in America for 10 years, educated here and fully participate in political activities, especially those meant to uplift communities of color, I am deeply offended by your comments on Africa.

What do you mean when you state that "Africa, as a region, continues it's lock on last place among humanity, when it comes to employing this evolutionary requirement of advancement?"

Did we not have systems by which to govern ourselves before colonialism? Weren't these systems broken down after the institution of colonialism? Yes, you are right, Sub-Saharan Africa does have corrupt leaders but you also have to understand that most of these countries acquired independence in the 60s, the same time Americans were having their Civil Rights Movement. These are young countries with infant governments which cannot be compared to other first-world or developed countries that have had the opportunity to fail and thrive. My country,Uganda, for instance only got independence in 1962. Do you really expect it to run perfectly, after two dictators, AIDs prevention efforts, etc?

1) What about the individuals, groups and organizations that are initiated by AFRICANS, not foreign entities or government related, that are taking responsibility for their own communities and not waiting for their governments to act.

Africans are not a bunch of backward people who do not want progress. Unfortunately, some of our leaders are idiots but that does not mean the average Africans do not want change.

You cannot measure Africa by the same stick by which you measure Europe and the United States; that is over-simplification, especially when you don't take into account unique factors like "Brain Drain."

I really do like your blog despite this major disagreement on my beloved homeland. Have a great day.

Anon 1:46, It certainly was not my intention to offend you, and I regret that you feel this way. Africa and its historical subscription to the rule of law (ROL) are not disputable. I merely point out that issues of the ROL existed long before colonialism for reasons having to do with the place and the people. As despiciable as colonialism was, the tribalism it replaced was not competitive and was responsible for more bloodshed and death. The reversion to that tribalism cloaked, exampled by Mugabe and others, represents opportunity loss. Even with this my company is pursuing development projects in W.Africa that are vital to progress. Thanks for your comments.

Mr. Collier, I am a Somali immigrant to the U.S and I thoroughly agree with your assessment. You would not believe the degree to which Somalis--at least those who are culturally Somali--are of a tribal mindset. Mind you, Somalia, much like Japan, is genetically and culturally very homogeneous, but Somalis are of a cultural mindset that simply precludes the cooperation so necessary for civilizational progress. Indeed, tribal feuding seems to be an integral part of the Somali identity.

So you're absolutely right when you say Africa is Africa because of its own baggage and not because of colonialism. Consider that Japan was fairly backwards (compared to the West) a hundred years ago, and today they're an economically leading 1st world nation. How was that transformation possible? While Japan didn't match the economic, technological, and scientific achievements of the West, they did have a very, very long history of governance and order. Thus it was possible for them to effectively mimic the West in all the most important ways because they had the institutions--and will--that could see through such progress.
I don't see a single black african country that has any such institutions, and that lack renders irrelevant any will there is.