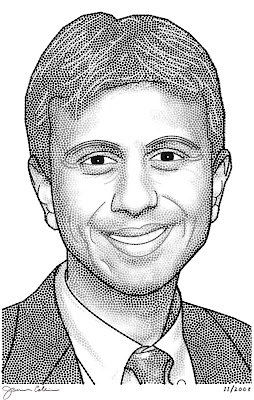 First, I will apologize for any rambling in this post, but all this recent transcending of race has me discombobulated.

Muslim terrorists in Mumbai, India kill at least 200 people, injuring many more, in the name of religious angst, and in this country Bobby Jindal, son of Indian immigrants and Republican governor of Louisiana, lands in Iowa, in a visit clearly calculated to test the 2012 presidential waters. First Obama wins, and now (perhaps) an ethnic Indian and Republican running for president? Ok, we have my attention.

Mumbai is a clear-on symbol of western influence in the second largest country on earth, and a growing battle-front between Muslims and everybody else, in this case Hindus. Rest assured that what disturbs the Muslims the most is the westernization, normally associated with Christianity and capitalism. This progress looks like fancy hotels, clothes, cars, dining, and unbridled consumption, all in a country many hundreds of millions deep in desperate poor - sounds like home minus the volume.

In the US, on Obama’s heels, the Hindu-turned-Catholic Jindal and white Republican power-brokers are considering if the remaining red-states are ready to put up a Piyush “Bobby” Jindal for higher office. Is Jindal, a Rhodes Scholar no-less, the remedy for beaten conservatives, rather than the good-old American whiteness of "Miss Incoherent" Sarah Palin? I’m wondering.

Now just as I was considering if the good old boys were finally going to have their American race war, this religious bloodshed leaps off the front-page, not only in Mumbai, but also Manila, Paris, Nigeria, Kenya, and more Muslim enclaves to come. In California, the Mormon and Black Church have become strange bedfellows in the fight against gay marriage. The Supreme Court girds for a new round of justices and more Roe v. Wade religious sparring.

The kicker for me was recalling how McCain practically handed Obama the election when he told a voter, and America, that Barack is NOT a Muslim. So its not just about Israel anymore. Does religion matter more than race?

UP NEXT: Is Poor The New Black?

There are many places around the world where people are killing and dying due to religion, but not so for race, at least overtly. Religion clearly does matter more than race today, but you hit the nail on the head when you pointed out that class matters most. There will be certainly be ethnic presidents but there will never be a poor president -- that doesn't even make sense...

And now what? I mean, great blog, but if poor is the new black, now what are you going to do, change it to 'Acting Rich'??

Fighting poverty is not fighting poor people, as much as fighting the conditions that make people poor. And this is your challenge. Most people believe that poverty is a condition that is mostly just rampant ignorance compounded by stupidity, and that it is correct for people to reject, disdain, denigrate, and reject that.

Do you disagree? What next?

Big Steve, let's not get ahead of ourselves. What do you make of anti-semitism, which can be both race and religion? I get the strongest dose of this on the blog, plus what I see on other blogs (high-end). When will we have a practicing Jewish president? or maybe a converted Jew for Jesus?

Many Muslim groups have definitely "racialized" themselves when presenting their case by describing critics as "racists" and using the term "Muslim-American" which is a euphemism for Arab or Desi Muslim. Muslim is definitely a new "race"

The US is going to breakup...it is only a mnatter of time.


I know people that are ready...they are just waiting for the word.

Tick tock tick tock...time is up.

The class war is doing very well in my home country South Africa as well. What we have seen is class taking over race issues - even when some peple are still "playing" the race game for their own class movement. We won one battle and now losing another...

What the Republican party fails to tell their supporters is that on Bobby's first run as Governor they failed to fully support him.

The career politicians who also ran for Governor jumped ship to the Democratic party because they were angry the GOP endorsed him and not them.

Whites regardless of whether they were rich or poor, blatantly stated publicly that they could not and would not vote for him because of his name, his ethnicity and his skin color.

In their ignorance, they instead voted for Blanko(Blanco) and as a result of her incompetence during Hurricane Katrina were left with a bad case of voters remorse.

Eventually they realized their mistake and voted for him the next time. I voted for him both times because he was the better candidate.

He has stumbled somewhat during his first term by trying to appease a lazy Legislature. He has proven his level of competence and authority before the onset of Hurricane Gustav, he chose not to play the partisanship game as Blanco did and called out the DHS on their own incompetence and failure.

He wants to change Louisiana politics and hopefully the mindset of the state, he just doesn’t realize the monumental task at hand and I wish him well for his endeavor.