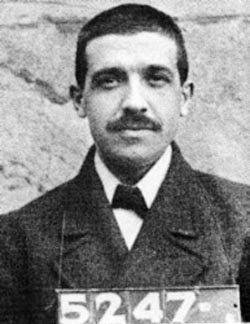 I woke to an NPR report of a suicide of one of Bernie Madoff’s Ponzi investors. Seems the poor fellow loss something like $1.6B of other people’s money, with Madoff, including his own 150% leveraged position. I am not surprised that tragic exits might follow such an event, and old Bernie better remember to zig and zag while walking in public, as I see it. (Pictured: Carlo Ponzi)

Anyway, they say he stole $50 billion, but that’s a lot of money to just go poof. Where did the dough go, really? Bernie still has, by all accounts, a few hundred million, now held on ice by the authorities. So I did my own back of the envelope analysis to try to understand what really happened to the money.

For starters, practically speaking Bernie did not steal $50B, rather he redistributed a lesser amount, say about $40B (for a fee), among a small group of very wealthy, mostly Jewish, victims and their philanthropic organizations. Of course, he carried out this redistribution without anyone’s permission, hence the technical accusation of stealing.

If we assume the $50B invested over 20 years, with an average bogus return of 10%, we just found $5B in fake profit redistribution from later to earlier investors, in order to keep the Ponzi game lubricated. Now if we figure that Bernie made 5% in fees, and another 5% went to other middle men, then we just found another $5B that was simply eaten up in cost. So now we are left with $40B, most of which was either paid back as principle to earlier investors - redistributed, or lost in a crumbling market (like my 401K).

So yes, Bernie is a low-life thief who used his Jewishness to prey upon other Jews, but there are also bunch of wealthy Jews and Jewish organizations currently in possession of a lot of other people’s money – and I bet they don’t give it back willingly.

So in the end, Jewish philanthropy will survive, perhaps in different hands, courtesy of Bernie. The rank order of richest Jews will certainly change, thanks to Bernie. The Palm Beach Country Club will likely print Bernie’s picture onto the seats of all their dining room chairs – and life will continue. But the question will remain in the minds of many, how this man, a Jew, could hate the Jews, and his family, and himself so much, all at once.

his Jewishness to prey upon other Jews

his whiteness to pry upon other whites.

Anon 12.37, google "npr affinity fraud", and then type in "clueless", for a picture of yourself.