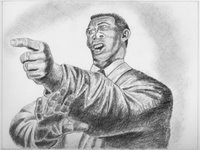 Whether a sincere apology is offered or not by the Washington D.C. pastor, who referred, in a recent sermon, to homosexuals as 'faggots and sissies', this outburst reflects the carte blanche that clergy have wielded, down through the ages, to encourage the exercise of bad deeds in the name of God.

To equate the mayor’s request for an apology to religious censorship and, by inference, telling God what to say, is but an attempt to shield bigotry with the bible. By example, the bible instructs slaves to mind their masters, but we can be sure that clergy all over the world, especially in the District, would have no problem instructing their followers to revise their interpretation.

Let us not confuse the labeling of homosexuality as sin, with bigoted name-calling from the pulpit. The labeling of any particular behavior as sinful is an exercise of religious freedom and constitutionally guaranteed speech. Vulgar name-calling woven into scripture, alternatively, is the kind of miss-guided exhortation that encourages congregation members to go out and discriminate in vital services, and even feel justified in ‘bashing’ the alleged ‘sinners’.

Furthermore, this type of leadership encourages the prevalence of ‘down-low’, or clandestine, homosexual behavior in the Black community that helps to maintain the threat of HIV-AIDS, and its devastating toll. Too many Black men live in fear of just this type of response, keeping double lives that put innocent wives and partners at risk.

As victims of bigotry and discrimination, we would hope that Black people would have a heightened rejection of all its forms, but this is too often not the case. Clergy leadership needs to be held to the standards of no less than their ‘cloth’. We should not accept such un-Christian invocations, in God’s name, to contort the requirement of treating each other with care and dignity.