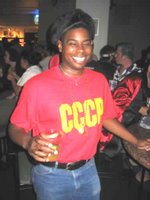 We should all be saddened to know that dark-skinned immigrants, including Africans, are experiencing violent racism in Russia. However, it is worth noting that these minorities are clearly out performing the standards of their adopted society, even though they come from very disadvantaged backgrounds.

We are seeing, in lesser volumes, African immigrants perform well in the US, if we examined college matriculation data, although the difficulties of entry and the cost of US education are prohibitive. These accomplishments, however, are over shadowed by the under performance and resulting plight of Black Americans.

Similar to Asians coming to study, work and live in America, Africans in Russia are a self-selected group, with the immigrant character, reflecting the will that finds a way. Accepting for outright refusal of access and services, they stay focused and committed to the goals of education and making better lives for themselves.

These modern-day descendants of Black America’s ancestors show no genetic predisposition, as real science would predict, to score even close to a standard deviation below the mean of Russian society, as Black Americans do with US Whites, on standard test. They quickly overcome the technological disadvantages of their homelands to become professionals of note in their new, but hostile, environment.

These examples of accomplishment and perseverance should serve as indication that advancing behaviors, once applied, cause nearly instantaneous accelerations in contribution and reward. Hundreds of years of disenfranchised living in America should not dash the promise of drastically improved Black lives, just around the bend of commitment to education.