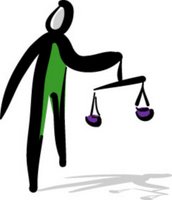 I remember being told by Whites, as a kid, to go back to Africa. I always thought that if White people forced Blacks to come here against their will, I would certainly make sure I stayed put, if only to spite them. In any case, Africa remained a place to be 'from'.

Nonetheless, as multiple African leaders, including Liberian president Charles Taylor, face society-advancing prosecution for crimes against their people, I cannot help but rejoice for the continent, and at the same time shake my head at the similarities of third-world African kleptocracies, weighed against events in the Black community here.

In particular, my attention is drawn to the sameness, in a relative sense, between Mr. Taylor and the ex-president Delores Cross of Morris Brown College, a historically Black College in Atlanta. Ms. Cross recently plead guilty to embezzlement and saddling individual students with $3.4 million in fraudulent debt, while dealing a near-death blow to the 126 year old institution.

Many young Black people who barely set foot on the Morris Brown campus now carry the burden of repaying loans against non-existent educations. It is hard to understand how our justice system would allow a reduced plea in her case. As an educator she assaulted the futures of young people, and surely killed some. The comparison with Taylor is harsh, but knowledge via education is indeed life-giving.

As Africa struggles to progress from advanced chiefdoms to full-fledged states, including adherence to the rule of law, Blacks should not ignore the sobering social artifacts they hold onto that keep them back. We will always be able to point to others as perpetrators of frauds, but much of our plight is about what we ‘do unto ourselves’, on the way to ever getting the opportunity to properly ‘do unto others’, in biblical style.