Can The Feds Go After Zimmerman For Killing Trayvon Martin? 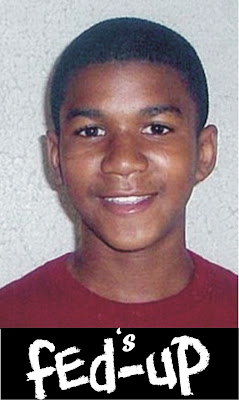 As more and conflicting information comes out on the Trayvon Martin killing by self-appointed neighborhood watch captain, George Zimmerman, history tells us that the probability of a satisfactory decision by a local jury of his peers lessens - regardless of Zimmerman's ultimate culpability in the death of this young man. When Zimmerman strapped on the weapon and ignored the 911 operator, he went down a road of no return as the aggressor, however victim Martin defended himself. The State of Florida should convict him, all things being equal. Of course, we know that equality is a curious thing.

In this light , I went looking for the US Attorney's position, when and if the state of Florida unconvincingly delivers justice, leaving the people to act up and out (into the streets). As it turns out, there is only one avenue whereby Zimmerman finds himself in Federal crosshairs - that of committing a hate crime. And the evidence that convicts him will likely be the 911 recording.

What the Feds will try to show is that Zimmerman killed Trayvon, due to his race. It is important that the two did not know each other, and Zimmerman identified Trayvon by race, and included negative language eluding to his race, 'these guys always get away', and including a potential racial slur.

Certainly, the Feds would rather not intervene, but their response is dependent on the local system generating some credibility, and so far this has not happened. The white Sheriff, who stepped down, admitted that the crime scene investigation was not thorough, and his office has a reputation of bias and laziness. It certainly hurts credibility, all the way around, that George Zimmerman is not on 'ice', rather than walking freely and uncharged nearly a month after the killing.

This is a hot topic for the feds.
Super hot.
If they pursue it and the evidence shows otherwise, Obama will earn how many millions of people thinking way less of him? Holder is already in a heap of crap now with fast and furious. He can't take much more.

BTW Zimmerman's black friend says he said "goon" that night and apparently he didn't "know" he was black, he said I "think" he is black.

Remember, all that is needed is reasonable doubt, and besides, where can an impartial jury be found anywhere in the US after the media has made such a mess of their so called reporting.....

In a gated community in which everyone knows one another, seeing someone you don't know and going up to them and asking them who they are and what they're doing doesn't make you an "aggressor".

With the neighborhood having had a series of recent robberies with no one being caught, Zimmerman isn't out of line to want to go visually ID someone he doesn't recognize and thinks is suspicious, and ask him who he is. If Trayvon responded to a simple "excuse me, but do you live here?" with a physical attack of sucker punches and haymakers on Zimmerman, he's in the wrong and he's the instigator/aggressor.

All of that, of course, is dependent on Zimmerman's account of the events being accurate. TBD. And if Zimmerman was previously tailing Trayvon in a creepy way (which seems very possible), it's of course understandable that Trayvon was frightened and on edge.

This is so tough to come to conclusions without knowing exactly how everything played out.

I do definitely agree though that the local system isn't exactly generating credibility, as you say... they've been very slow to react to everything. Some Fed involvement would give people confidence that this is being treated with the proper seriousness.

It's human to want to make sense of the world around you. We look at tragic events, analyze them, and expect to find a clear answer.

In the case of human-created tragedies, such as the shooting of Martin, we want so desperately to identify the "bad guy." Sometimes there is a "bad guy," and earthly justice can be transparently disseminated. Sometimes it is clear that there is no bad guy at all, only a tragic accident. But more often than we realize, two angry fools cross each others paths in the middle of the night, and one of them winds up dead.

What happened between Martin and Zimmerman was likely a cascade of foolish behaviors. All we have is Zimmerman's and a partial witness account, everything else is conjecture. Since Martin is not alive to present his side, nobody other than Zimmerman actually knows how the fight started.

One side of the fence says Zimmerman stalked, confronted, attacked, and ultimately murdered Martin simply because he was black. The other side says Zimmerman was merely doing his civic duty to observe and prevent crimes in his neighborhood, and did not confront Martin, but was himself attacked and forced to use deadly force in his own defense. Reality is always somewhere in the middle.

Allow me to present a possible option #3: What if Zimmerman, an overzealous wannabe-cop with a handgun and a criminal justice degree, took it upon himself to stop the crime in his neighborhood, so he zeroed in on Martin. Perhaps Zimmerman pursued and verbally confronted Martin. Martin, a young, aggressive wannabe-thug felt himself disrespected by Zimmerman. Tempers flared and the two began figthing. Who threw the first punch is irrelevant. Zimmerman then found himself on the losing end of the fight, perhaps because Martin didn't know when enough was enough (after breaking Zimmerman's nose and bashing his head into the pavement). Zimmerman then pulled his pistol and killed Martin.

I'm not saying that option #3 is the truth, but it's just as valid as any other guess at how this fight started.

Some bigoted Mexican/latino type looking for trouble after being told by the police not to pursue suspect, then kills suspect. And to top it off, sorry police officers arriving on the scene and conducting a lousy job and who are possibly racists themselves. You have all the elements of a perfect storm.

I'm sorry. The facts are Trayvon was minding his own business, on a cell phone call and holding snacks. His crime was being a victim of racial profiling by a neighborhood vigilante, with dreams of being a police officer. Despite the fact that he was advised against pursuing the young man he did so, while muttering racial epithets to himself. This alone confirms the "race" issue in all of it. You cannot take the law into your own hands, take a life and cry about it afterward.

In the case of human-created tragedies, such as the shooting of Martin, we want so desperately to identify the "bad guy." Sometimes there is a "bad guy," and earthly justice can be transparently disseminated.

All I am suggesting is that this whole messy incident might be a bit more nuanced than the media has so far reported. The media, and political groups, have drawn the lines at two completely polarized potential explanations about what happened. One camp says that Martin was an angel and Zimmerman was a villain, while the other camp reverses the roles.

But few, if any, have suggested the entirely probable possibility that Zimmerman and Martin might both have contributed to this tragedy to some extent. Because the facts of the case arent actually as transparent as many suggest.

What we do not know is the most important part, How the fight started. Did Zimmerman make threats to Martin? Did Zimmerman grab hold of Martin to unlawfully "detain" him? Did Martin simply attack Zimmerman? Did they both engage in "mutual combat." The answer to this question is pivitol, and it explains why Zimmerman has not yet been charged. Because if Zimmerman made no threats, did not make initial physical contact with Martin, did not display a weapon, or did not incite someone else to harm Martin, then Zimmerman cant be charged with murder.

Please don't confuse my supposition-based illustration with the facts of this case. I have no idea how the fight between Martin and Zimmerman actually started. I am merely attempting to explain why charging Zimmerman with murder is more complicated than the media outlets have so far expressed.

The prosecution must prove beyond a reasonable doubt that Zimmerman is lying about how the fight started. In order to do so, some sort of evidence must be presented that contradicts Zimmerman's story. It is possible that this evidence exists, but so far, no evidence that been made public indciates that Zimmerman has lied.