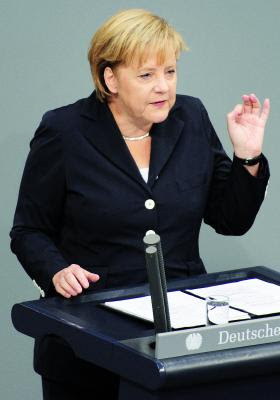 Different political factions within Germany would seem to be raising the bar on immigration, and I (for one) do not think this is a bad idea.

The German Chancellor, Angela Merkel (pictured), stated recently that, ""Subsidising immigrants" isn't sufficient, Germany has the right to "make demands" on them, she added, such as mastering the language of Goethe and abandoning practices such as forced marriages." (here)

I would disagree with Dobrindt that America can somehow 'afford' an immigration policy that is more costly than it is beneficial. A common language, English, should be required in the US, and religious and cultural practices that conflict with constitutional freedoms and responsibilities should not be allowed. Amnesty for illegal immigration should be considered after the needs of legal citizens are met, and when the immigrant offers a skill we actually need. Cheap service labor is a short-sighted reason for open immigration policy. Employers of illegal immigrants should pay fines commensurate with the real cost of extending the bevy of services to them, until such time where the 'alien' and their dependents becomes a citizen, or is deported. Anchor-baby schemes need to be halted.

In Germany, as in other parts of Europe, you can certainly find your racists if you look, but immigration policies that subscribe new arriver's to a minimum set of requirements aligned with local social evolution are not automatically guilty of such.

Diversity is neither an automatic weakness or strength, rather it is certainly dependent on sensible policies of assimilation and accommodation - something in short supply around the world.

Right on, JCC. If I may paraphrase Steve Sailer: "That's what we have different countries for!"

Most countries have, until recently, had steadily evolving cultures and populations with different "lifestyle preferences", to use the postmodern term. It's no judgment on a different culture to say "You might like to live this way, but we don't." Those who would come into a country because of its character should only be allowed in if their admittance will preserve that character.

Well, Professor Collier
We moving closer in agreement, Europe doesn't make the allowances that America makes. We are still operating on short sighted economic goals of cheap labour, I remember the outrage that was poured out towards Home Depot, when the choose to outfit some of there stores with large signage in espanol, with english in smaller letters. This accomodation doesnt exist anywhere else in the world. Trying finding English signage in Latin, and South America!

Quiet as its kept, many Corporations in the US are biggest violators, and condone accommodation of illegal immigration, in there hiring practices. I say stem the tide of immigration by stricter assimilation, stop allowance of language as culture excuse. As a American I shouldnt need a translator in my own country...try getting around some communities in Miami, NYC.

Immigration, If not done well, can be used as recruitment tools for white Supremacists/extremists/nationalists..

If the countries want to take the easy way out for immigration, just invite asians/south east asians to your countries :P They will give you no problems and assimilate peacefully :D

it's a about time.
With each passing year it becomes more and more obvious to me that making distinct people live together in one country is an extremely difficult and perilous task. It's probably best avoided. This implies that foreigners who want to settle in must absolutely assimilate. If there's no assimilation, even immigration of high IQ, low violence people can spell trouble. How ? High IQ, well organized foreigners who remain a separate community inside a nation will have interests and values which might conflict with those of the natives. That means conflict.

When the economy is doing well, everyone prospers, not just immigrants.

Additionally, I believe there is a study which states that immigrants pay back their 'cost' within a year of productivity. Of course, those aliens who end up being criminals are a drain on society, but those who are working as dishwashers, waiters etc. will in turn spend their money on local businesses and help the economy.

Just a thought - fire and brimstone aside, flexible immigration policies are actually pretty good for any country.