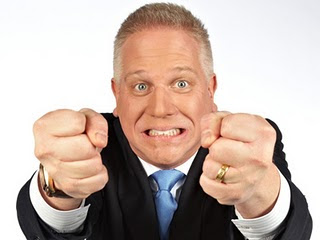 Listening to the likes of Fox's Glenn Beck and others, some people might say that white folks are determined to earn their fair share of the blame for these eventual Divided States of America. I’m not talking just about the decision to build this country on the backs of stolen people, but rather the posture of showing that nothing about past mistakes bothers the future. Beck's cornerstone is that “Obama is a racist with deep-seated hatred for white people or the white culture”.

The flip-side of the thwarting effects of black oppositional culture, (here), are those reactions, such as what we are seeing this past weekend at Beck’s “Restoring Honor” rally in Washington DC, wherein white people recall the days and ways of old. Trash-talking about taking back America with ‘old fashion values’ is simply code for reinstating bad decision-making of old.

Ronald Reagan was great at helping people remember, with fondness, those times when everyone seemed to get along in America, even if only because certain people knew their place in the order and kept themselves to it. Of course, this dreamy existence was bound to be short-lived, as those at the back of the bus became less willing.

And now, all that cheap labor from south of the border is not seeming so cheap after all. Let’s have a tea party to forget the fact that white businessmen and politicians practically sent buses to get the migration moving and have kept the flood gates open for decades (even now). But maybe one day folks may see that the constitution meant to give elite and powerful men the means to do just what they want – even if it kills the golden goose.

This is one ironic mess we are living.

"On the backs of stolen people".? other tribes of Africans sold us into slavery namely the Ashantis that enslaved us, along wish the arabs. Also, although i didn't like Reagan, my aunt who was a black businesswoman seemed to do quite well under Reagen when she had her own nurses registry--Reagan cut taxes and it opened up business in the 80s, if we blacks kept 'our nose clean' and stayed away from dope, it wasn't that bad

Just when I think I have you pegged as an honest to goodness black man that is willing to tell fellow blacks that it is time to get on with the business of getting over oppositional culture you actually become oppositional yourself.

MLK's niece apparently gets Beck's message and agrees with it.

Al Sharpton could only complain and yes it was captured on tape, that "they" were trying to steal the MLK anniversary speech date.
The he denied it but too late.

BTW Beck has vehemently apologized for the Obama racist remarks.

The rally was about recapturing core values of honor, hard work, honesty, etc. and that alone.
All things all people should aspire to all the time.
If more people of all races aspired to those values this would be a much better country.

Anon 10:40, I seek to neither indict nor absolve, but to acknowledge. Are not both the seller and buyer culpable?

Ano 2:32, I am no supporter of oppositinal behavior/attitudes, as this blog shows. And King's niece speaks for herself, alone. I believe in hard work and honesty too, but the on-air garbage Beck speaks can go by no other name. regarding apology, he needs to prove his sincerity, in action.

In many an opinion continuously bringing up slavery is oppositional and anti-proggressive.
It is past time for that period in history to stop being used as a sledge hammer to bash people with.

Just as liberation theology is used in many churches to continue the myth that acting white is something to be avoided many blacks still insist they are victims to whites.
Yes they are truly victims, to themselves and to those preaching black liberation theology and the sermon of the constant and forever victim in all things race.

More blacks have suffered from listening to and believing the "garbage" issued from the pulpits of many of the so called black reverends that do not preach honesty, hard work, self reliance,and dedication to family that Beck is speaking of.
They'd much rather preach about using the "victim status" to get what they can from any means possible from "whitey" since their ancestors were slaves and that justifies almost any behavior.

You tell me which is the more positive and constructive message for all of society. The one Beck and many others including King's neice gave at the rally or the one Sharpton gave..........

As far as Beck's apology he admitted to having a "big fat mouth" and that what he said about Obama was totally inaccurate.

How many times do you hear self examining words from any of the so called black leadership in this country.....

Al Sharpton's speech was taped.
He was asked about many totally off the wall things he said.
He squirmed like a worm caught on a hook dodging those questions trying to say that what he said meant something else altogether.

This country as you said in another post is reaching a point where something must change and that change needs to be honesty, strong morals, ethical strength, commitment to family, self reliance, etc.

It's hight time that message came from somewhere and it might as well be Glen Beck because it sure isn't coming from anyone else.

I love that you have this website, but you have to remember why you have it. Dont get caught in the hype. Be a rare breed that does their own thing. The racism thing is such a joke now, its out of control. I wouldnt even notice people's color if it wasnt for cnn etc... Its disgusting how much cnn and other shitty news outlets influence people. Black people in the majority cant get over racism... their some of the most racist. And whats sad is I run a website for an oldschool brooklen dude and advertise his artwork. His work is seriously the shit. But he comes from the old brookland renaisance. These days the majorit are pathetic.
im done peace

James, I have written a post on Glenn Beck and company. However, it is 2386 words long, and as such exceeds the limit for your comment posts. It was primarily written as a guide for black folks who are completely confused over the explosion of racialism in the public discourse in light of this supposed "post racial" era for America. Any suggestions??
Parvenu

"Let’s have a tea party to forget the fact that white businessmen and politicians practically sent buses to get the migration moving and have kept the flood gates open for decades (even now). "

I have been warning about this for years. The fact that the Republican elites are responsible for the mess doesn't enter into my calculations when I oppose illegal aliens and anchor babies.

You don't get to choose your allies.

My issue with Beck and Tea Party company is that being right for the wrong reasons engenders no confidence. Traditional racist rhetoric does the problem of immigration an injustice, when exploiters are left unscathed. American ideologist are too dumb to see that cheap service labor cost more than it is worth (kinda like slavery), but when they finally get it they are ready to hand out one-way tickets. US (including Arizona) is not willing to go after companies and people who hire illegals - we should start by putting employers in jail, to match deportation. It is no different than arresting prostitutes, while letting John's walk. The double-standard opens up the accusation of racism.

Parvenu, if you like you can send me your article (email). Depending on how it reads, we can go from there.