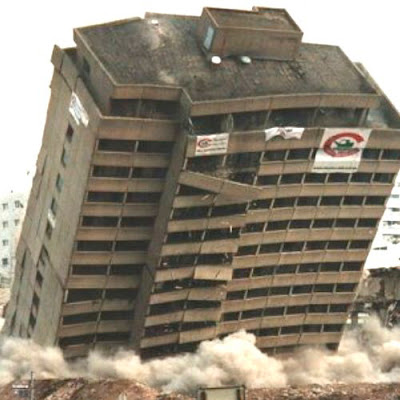 The previous post, “Random Organ Donor”, demonstrated, via shock-irony, the key quantum mechanics principle called the Pauli Exclusion, whereby two objects cannot occupy the same physical space in time. In the YouTube scenario, ‘Gangsta’ meets ice cream truck’, someone or something had to yield, forcibly, if not voluntarily.

Besides demonstrating a key physics’ concept, the video foreshadows a more looming outcome facing us– social collapse. America once was a country where immigrant-minded people scuffled in order to grab their American Dream, that of owning their own business. In this case, it would be buying an ice cream truck and hoping that the product did not melt before getting it to the clamoring customers, the kiddies.

But what happens when a critical mass of the population, demonstrated by the Gangsta', take an ‘oppositional stance’ to the direction that our society has been slated these past two hundred-plus years? Not only does the Gangsta’ not buy or seek to sell ice cream, but takes specific steps to thwart the commerce of buying and selling of ice cream. If he is successful, the business fails and the masses go without.

Let’s be clear, this country has always harbored forms of internal opposition, to our benefit, but in the end they were always assimilated (along with their contribution) to the ways of the social and economic engine which defined our advance. I challenge that we have reached a tipping point where oppositional maginitude has arrested our progress, under the current engine (constitution). Watch the news on any given day if you doubt that our society has stalled, or is in reverse. It is not just about mothers murdering their innocent babies.

Sorry to hijack your thread! After reading your blog, I thought you might be interested in knowing that I am organizing a blog blitzkrieg on September 22 dubbed, "No Wedding, No Womb!" in which a legion of writers, authors and bloggers will call attention to the rampant out-of-wedlock problem in our community. We already have interest from the media--this is a serious call to action. I'd love to give you more information if you're interested. Find me on Facebook. http://www.facebook.com/christelyn or email info AT beyondblackwhite DOT COM

James, this is too depressing!

MMC, seeing that Gansta' getting run over by the ice cream truck was like a hit on a crack-pipe, great high, but then comes the big crash. This post was the crash - sorry. Just keepin' it real.

James, this ties into the previous post "Teaching Black Kids" and some of the comments on the original author's posts... some of the kids had the "i'm entitled to everything and don't need to contribute" (paraphrased) attitude, which, is directly in opposition to the old American adage of "earning your keep".

If the pendulum swings to entitlement as the norm, well, we're screwed.

--If the pendulum swings to entitlement as the norm, well, we're screwed.

Once the Marxists assume control of the country, everyone will work. They will work or they will die.

What you so elegantly describe in your blog is merely Marxist revolutionary tactics. But once the revolution ends, Marxists become the most conservative people on the planet.