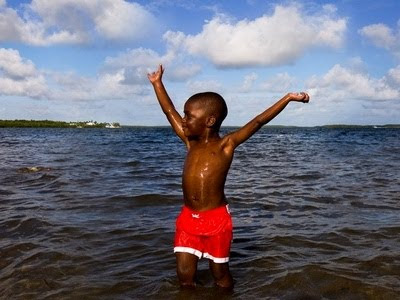 As a former lifeguard and swim instructor, I am haunted by the recurring tragedy of kids drowning, especially black kids. In a single event last week, six young people, ages 13 to 18, died at the Red River in Shreveport, LA. (here). How could this be? Single drowning is expectedly too common among blacks, where survey shows only 30% know how to swim, but six all at once? I had to noodle on this.

Maybe if I could explain why it happened, it would not hurt so much. Even with a good surmising of the events, I still ache when I think of what happened in a few short minutes. There are few things to note about drowning before I give my thoughts. For the most part drowning happens quietly, with little or no yelling or even splashing. Victims slip quietly beneath the surface. This is why on-duty lifeguards can often miss a close-by victim. Also, the urge to attempt to save another person, especially someone you know, is overwhelming. The hardest thing to teach a lifeguard is restraint when they cannot reasonably complete a rescue.

On the Red River, DeKendrix Warmer was the first kid in trouble as he realized a sharp drop-off in the river bottom, but he is alive today. So what happened? DeKendrix may not have been an able swimmer but his thrashing and kicking was sufficient to keep him afloat long enough to yell for help. It may be that his crude skills encouraged him into the murky water to begin with. Upon hearing his screams, his nearby siblings and mates of lesser ability would have been overwhelmed, and all six likely rushed simultaneously, contagiously and tragically into the deep water, immediately drowning.

A passerby and strong swimmer, Christopher Patlin, hearing Mrs. Warmer and other screams from on the shore, enters the water and pulls the still thrashing DeKendrix to safety. Again, he was the only one to make it out alive. The grief of young DeKendrix and the families of the victims must be unbearable. At this point, as a parent and YMCA volunteer, I can only plead that all parents get their children swim lessons, and teach them not to enter murky waters of unknown depth. Please!

We have to give our kids SWIMMING LESSONS AND DONT WORRY ABOUT THE HAIR BEING NAPPY! My daughter knows how to swim and my relatives taught their kids how to as well. If you're a guy, it should be a 'given'; keep hair shortif you're a girl, get cornrows and then LESSONS. I can't believe in 2010, black kids aren't learning in P.E. Unfortunaly, older black women don't swim well; we werent taught, because of 'hair'

What people need to know is not how to swim, as much as how to tread water, which is a related but separate skill. When I played water plol this was called "eggbeatering." As a minimum if people are taught to sweep their arms in wide arcs, palms down, they can probably generate enough lift to keep their head out of water until help arrives.

Agree that we should all learn how to swim and make sure we teach our children. This is the first time I'm hearing this story.

Great post. I too was greatly saddened by that tragedy.
It's a problem with city kids I guess because maybe they don't have accessible pools?

One of the reasons I decided to move to a rural area was I wanted my kids to live with nature, and thank God,that they did. They explored rivers, beaches, waterholes, surfed like fish.
They developed a keen awareness of currents and riptides, flora and fauna, and everything else that is part of nature.

My middle son even got to sit on a whale that was under his rowboat (he was fishing at night) and he didn't know it until the whale exhaled through it's blowhole!!! He saw the whales eye right up close to his!!! LOL! Miracle he wasn't thrashed. But he's got such a kind heart, maybe the whale sensed it and spared his life!

I also advocate teaching children swimming and all the precautions that entail being in nature. It's beautiful, but it's also dangerous