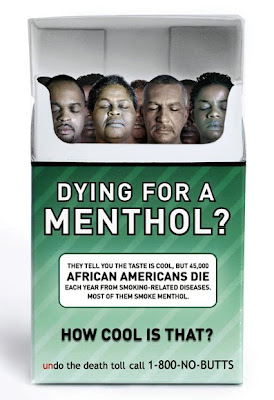 Menthol cigarette maker Lorillard, provider of the popular Newports brand, just put up a website (here) claiming that menthol cigarettes are no worse for smokers than regular cigarettes. They say this despite the fact that the original and leading reason for menthol's popularity, straight for the mouths of smokers, is that it 'cools' the throat from the uncomfortable heat of sucking down burning tobacco gases, unlike non-menthol cigarettes.

Tobacco companies are the best liars on the planet. What makes them so good is that their lies sound like the truth, except for some small subtlety, usually one word. In the case of Lorillard's website the word is "best".

The word best, in "best available" really means "best in our biased judgment" and allows them to eliminate any data that is contrary to their desire to tout menthol as having the same health effect as other cigarettes. "Same health effect" means that it kills you no differently than other cigarettes. The strategic use of 'best' allows Lorillard room to portray menthol as safe, while the company benefits from a toxic product with its own built-in subterfuge, in that it hides an unpleasant symptom (heat) of a proven-deadly interaction.

Lorillard is directly appealing to millions of menthol smokers with this campaign, most of them Black. So this is just my small little way of saying Lorillard executives are some serious f#$$!!! scumbags.

There is only one way African Americans or anyone else for that matter can avoid smoking related illness.
Choose to not believe the lies and choose to not smoke.
Not a darn soul has ever had anyone force them to start smoking.
If an individual chooses to smoke it's no different than picking up a gun and ever so slowly pulling the trigger.

Blame big tobacco for the lies but make sure you blame the person that makes the conscious choice to smoke to start with because those people are the ones that give big tobacco the power over them and they are fools for doing so.