Paying Folks to Help Themselves 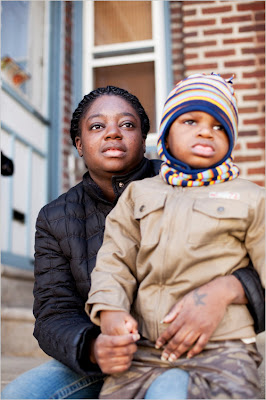 On the heels of talking about paying elementary students for grades (here), the NY Times article (here) on paying patients to take their medicine definitely grabbed my attention. I was also curious that the Times showcased this bizarre conundrum using Chiquita Parker (pictured), a Black twenty-five year old single mother with lupus. This was no accident. First we are considering paying Black kids to work harder in school and now wer'e studying paying Black adults, among others, to take better care of their health? Can paying Black people not to commit crimes be very far? Yet the Times never directly addresses this, rather they only imply it, and then move on. I hate covert racial plays.

If this is not a uniquely Black problem, then Chiquita should not have been the feature. If it is a significant Black thing, the author/editors should show some proof of this, and then get along with the straight story, including the aspects related to ethnicity. Be it racism, or painful truths about disparity, or general evolutionary malaise, we need to hear the truth for once.

The closest the Times comes to calling out the implication is to say that some of the studies have ranged across income levels. What? Experimenting on rewarding developing minds was one thing, but paying adults to coax them away from their pathologies has serious implications. Are we edging toward acceptance that some groups cannot seek the positive for its inherent value, but rather must be bribed away from non-advancing behavior? If this is what research is really telling us, then we need to stop the BS. Are we opening up new employment opportunities, that of not being a drain on society?

Let’s be clear, these studies have a place. But their importance is lost if they are not reported upon honestly. I have long held that if someone invented a free pill that made a person smarter and better looking, with no side-effects, no more than one-third of people would seek the benefit, rather than continue their current less-advantaged status. This is simply human nature. Humanity has progressed, not because of its greatness, but rather despite its failings.

Getting right down to it, with Chiquita and her ethnicity featured but not discussed, I see a bunch of arrogant liberal racist academics, who believe they can identify and fix Black group pathologies with Pavlovesque-clever short-cuts. They are saying Blacks cannot make it in the regular world, so they will create a fake one with twisted rules, because this is what good White folks do. These people are just as racist as the Klan – it’s just that their sheets hang out of sight, in twisted liberal academic closets.

Giving blacks crumb rewards for their substandard behavior only encourages them to continue to behave below standard. That wouldn't be what these people want, would it? I think it is.