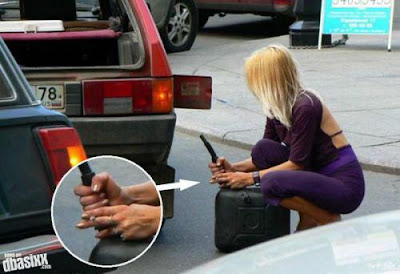 First of all, Darwin was right, for the most part the fit survive very well. Following this, those who are most fit survive the best (sometimes too well). Alternately, the less fit struggle, and the least fit do not make it - often tragically. Now at times, the fit can be accused of facilitating the demise of the less fit, due to their aggressive self-pursuits, but I am noticing more situations like the one pictured, where the least fit exit largely of their own volition.

Yesterday afternoon, as I drove past a middle school, the loitering summer school enrollees brought forth a great example of what I mean. As I approached, I spotted a beefy Black pre-teen kid lift a struggling, but laughing, Latino kid as if he were a sack of spuds, only to throw the kid into my driving lane. Yep, you heard me - smack dab in front of my approaching 5,000lb auto. I stopped abruptly, wherein dumb Black kid retrieves the still laughing dumb Latino kid, only to toss him into the center lane of traffic, in front of another car. SOB!

While preparing for his third toss, I yell for them to get out of the street, which only gets me called all sorts of names I won’t repeat (by both). I then exit my car toward the kids, who are still blocking traffic with their ‘throw my buddy Hector into traffic’ game, I am now so mad that I can only think about which arm to rip from its socket first. Thankfully, the kids back down and move to the sidewalk. I drive on home, needing a vodka to calm me down.

So what did I learn, you ask? In sum, people, especially kids, are stupid and many will expire, slowly or in a flash, by their own doing. Too bad, I say, but I can’t do anything about it. I need to just chill to the inevitable fact that I am going to see folks do some amazingly dumb shit that threatens to get them killed or maimed. I also learned that letting them suffer or die, from a safe, comfortable, budget-minded distance, has nothing to do with my ethnicity, racism, class-ism, my compassion, or my humanity. It’s just the smart thing to do.

Technorati Tags: Survival of Who? What? WHAT!!!!, Darwin, Survival of the Fittest, Juveniles, Acting Black, Acting White
Posted by James C. Collier at Tuesday, June 29, 2010

I really liked the line "I also learned that letting them suffer or die, from a safe, comfortable, budget-minded distance, has nothing to do with my ethnicity, racism, class-ism, my compassion, or my humanity. It’s just the smart thing to do. " I have to tell myself this-especially when working with kids as a teacher. I really appreciate your blog-and this post.

ReelAphro, thanks for hearing where I'm trying to come from.

Good post and funny too but oh so real these days.

Good thing the kids didn't retreat huh? What if they had just been stupid enough to take you one?

The thing is stupid people don't expire. They just go through life sucking off the system, you and me, and creating more stupid people to do the same.

That doesn't happen in nature.
The sick, slow, stupid, etc. don't last long and they don't suck off of their fellow creatures. They just die or get eaten.

Can we let the stupid people die?
Of course not but so far what we are doing to get them from stupid to decently intelligent isn't working. Oh yeah, we aren't doing anything to change that. We just throw checks at them to help them since they are stupid and can't get their act together.

But they must be that stupid. They have learned how to work the system like pros. They manage to get the cash to buy all manner of junk while still letting the neccessities of life go wanting.

Well there is stupid popping up it's stupid head again.....

And we are stupid for letting it happen for so long and making the contant excuses for just plain stupid behavior.

Meant it was a good things the kids DID retreat.
apologies.

The kids in this entry remind me of a game my classmates in elementary school used to play. It was called, "Run into the street in front of a car and run back out of the way." They'd try to get others to play and call them stupid for not "knowing how to have fun."

These kids were in the top class at our school.