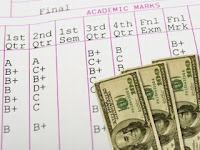 After two years, four cities, 261 urban schools, and $6.3 million, for an average incentive of $166 per student, Harvard economist Roland Fryer has concluded his study of financial incentives and student achievement. Fryer had the laudable goal of understanding, from an economics standpoint, if the performance gap of urban school kids, especially the black-white gap, can be reduced or eliminated with cash incentives.

The results were not surprising (see earlier post), except maybe to Fryer. Economists tend to believe in the all-powerful character of money, as surrogate and vessel of our wants. The problem, of course, is that the link, while strong at times, is also weak, as well. In this case, Fryer found no positive or lasting impact in paying students for good grades. He concluded that paying kids for a result, that being A’s and B’s, which they did not know how to attain, was a wasted exercise.

On the other hand, Fryer was able to conclude that paying kids for ‘input’ behavior, like reading a book, did have a positive and lasting impact on their achievement. Additionally, paying for good attendance, and good behavior, including the wearing of uniforms, also had a positive impact on scholastic achievement. So the money our parents used to bribe us to read (more) during summer vacation was well spent? Yep.

Fryer goes on to say that cash rewards for input behavior are the cheapest way to help poor kids, even better than current federally-funded programs like Head Start. I take this to mean those current programs are probably more ‘fancy’ (and costly) than they need be. Reading books is both simple and critical because it enhances vocabulary, and the number of words a child knows directly correlates to how well they perform in school.

Check out the study and results here under working papers.

In elementary school my mother paid me $5 for every A and $3 for every B I received on my report cards. For every C she deducted $8 from the total. I did not get an allowance and at that age it was life-changing money to me. It was also the early 80's so the cash went a little further than it would today. It worked until I was a little older and matured enough see the value in getting decent grades. I never got another C, much less D or F, as long as the cash was on the line.

'Pay for performance' by itself can only go so far. Students must also be trained to understand what the consequences of both good and bad academic achievement will be for them as individuals. This starts early in life and is an on-going process.