Obama and Race: The Little Check Box that Could 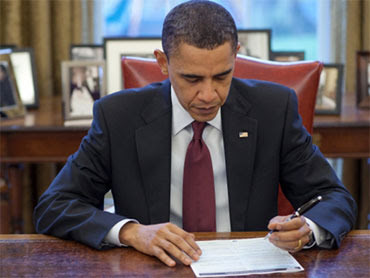 President Obama, half-white, half-black, declared himself singly Black/African-American, on this most recent census inquiry. The form accommodates multi-racial declarations, so people on all sides are saying “why did he do that”. Arguably, there is meaning in what form of the past, present or future the current president lives - and leads.

By the historical ‘one-drop’ rule, Obama is a Black man. This country was formed and has existed under the notion that a single Black ancestor outweighs any and all White, or other race, ancestry. Of course, we now accurately know race to be a social construct, reflecting different paths, rather than worthy genetic distinction.

To declare that he is White would be silly, although the greatest parental influences in his life were his White mother and White grandparents. To say he is both Black and White would be accurate, but offers little to the issues, if any, of allegiance. So, how does he maintain the delicate balance of the ‘perfect storm’-support, in which he won election.

What the president is saying, with his choice, is that he is a Black man leading a whole nation, even for those who would not have him lead, due to his multi-racial background. His declaration is steeped in the past, and noble to the leap-forward that it represents. His famous first, and the full scope of the accomplishment, is lessened if he declares himself to be ‘sort-of’ not Black – the first big mistake of another partially Black celebrity - Tiger Woods.

Voters saw and heard what they wanted when they voted the presidential election. Obama can’t be blamed for the circumstance of appealing to so many at this time in the country’s history. Declaring full blackness on the census is most politically defensible and expedient. As the president defines behavior in the ‘race zone’ (here), he also needs to remind people that he is Black. Otherwise, his characterized inaction on issues of race might be mistaken as forsaking historical Black plight – a growing accusation of the political Black Caucus.

It is amazing how one little check box could hold so much.

It isn't true that the one drop rule applied from the nations founding, nor would it be true to say every state observed it. The census included a mulatto option for a long time and in many cities mixed people were seen as and treated completely different from Blacks. The one drop rule is more related to Jim Crow than anything.

JP: The 'taint' of any amount African heritage is an undeniable cornerstone of this country, whether by law or custom. If there is a point to your nit, I welcome it.

No one denied that. I'm just generally annoyed by the silly pseudo intellectualism that is rampant on some of these sites. The point is, I suppose,that misunderstanding something as simple as the application of the one drop casts a cloud of the rest of your commentary.

The article is garbage. Either we as black people move forward or are we perpetually stuck in the past? And why are we even acknowledging the rules of the slave masters? One drop was their rule. Time to end it. Obama could have made a better statement by using the multiracial declaration. THAT would show the TRUTH of where America stands today: we are all descendants of different groups of people. Here. Now.

Why should Black get out of the past? I think Negroes would be better served by going back there. Zulander in with another fallacy. Everyone in America is not mixed, where does this nonsense come from. I'm Black not mixed nor multiracial or any of the term diversity freaks want to impose on us folks who enjoy being Black.

@Ziv I also think Obama should have used the multiracial declaration. I sort of understand why he declared himself just as black because he did not want his accomplishments to be attributed to being partially white. However, I think he should have marked that he is white and black because he was greatly influenced by his white relatives. I think it was important to distinguish himself as black to show how racism is being confronted, and that America is changing since a Black man is president and lives in the "White" house. However, it should have been just as important to distinguish himself as white to mention his influence from his white relatives and more importantly, to express the multi-racialism emerging in America because multiracial people suffer discrimination from multiple races. Also, any thoughts about people who mark themselves as "human beings" or "American" on the census? Yah? or Nay?

Who are we to judge why Obama put down Black/African American? And why does it matter so much? Could it be that President Obama, racially, feels more like an African American? I'm of mixed origin myself and don't check every box - I check the Hispanic (Guatemalan, if available) box because I believe I identify more with that 'box'.

@Jorge I think the differences in opinions may be rooted in everyone's fundamentally different conceptions of the definition of race and ethnicity. To me, race is based on biological factors, and ethnicity is based on the culture one may identify himself/herself as. Based on my definition of race, Obama should have marked both the white and black boxes. However, based on ethnicity, he could have just marked one box because of how he identifies himself culturally. Though even if it was based on ethnicity, it seems as if his white mother and white grandparents who raised him most of his life would have had an influence on him. I believe he also attributed his political success among white and black audiences due to his experiences as a biracial individual.

I believe that Obama has the right to define himself for himself. He does not owe any allegiance to the multiracial community or any community for that matter. He campaigned for the position of President of The United States of America...This is not about pushing an agenda for multi-ethnic people. Just like Tiger Woods has the right to call himself Cablinasian Obama can refer to himself as a black man.