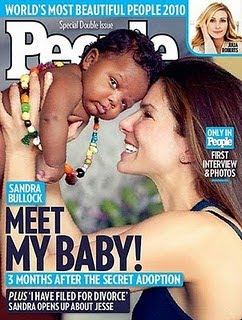 Truth follows fiction, follows truth? Or so it would seem. Sandra Bullock, who won an Oscar for portraying a White mother who takes in a homeless Black youth as her son, has recently announced that she is adopting a newborn male infant, who happens to be Black. So what’s going on here?

Is Bullock some kind of Angelina Jolie-wannabe, bringing the plight of the unfortunate into the public eye? Or is this another case of exotic-baby-as-pet to a Hollywood celebrity? Is the baby a hapless pawn, destined for a tortured life? How should Black people feel? Should her marital problems influence the situation?

Assuming she gets her pick of roles, I suspect that the same underlying emotional attraction that drew Bullock to Blind Side is showing itself in her adoption choice. Whatever one thinks, she gets high marks for consistency. Unlike Americans who go far and wide to adopt, I applaud her willingness to drop the gloves and buy (adopt) US, particularly a Black baby. She knows, intuitively, that she will have to share her son with the Black community and critical commentary is only a headline away.

As for the wellness of the baby, race is a social construct that means everything to some and nearly nothing to others. Bullock has the resources to mitigate the challenges. Whether she has the common sense remains an open question, but also one of nobody else’s business. The challenges of being a superstar celebrity parent will far outweigh race differences, and are much more likely to detract from her parenting - ask Michael Douglas.

I don’t expect a rush of adoptions of Black orphans because of Bullock's profile. More people might consider adopting outside of their race, and I think this is a okay, but adopting is too difficult and expensive to ever to become a fad of the masses. As for Black opinion, I think the Black Psychology Association finally shut-up about being against interracial adoption – not a minute too soon. The related cross-racial issues with an adopted family are preferred, in any sensible opinion, to the truckload of issues that Black orphans suffer at the hands of this country’s foster care system.

Lastly, Bullock announced her impending divorce. This is a non-issue. She committed to the adoption prior to her split, and has bonded with the baby. Those who don’t agree with single parenthood are ignoring that current wedlock and divorce rates are, in part, a significant function of enduring bad marriages and the resulting dysfunctional parenting that follows.

stumbled in when looking for a Lena Horne quote.

As a white father with a son from Ethiopia all I can say is "Amen" to this post.

It's amazing what has happened with a READERS DIGEST article (thats the first time ive seen the white woman who 'adopted' a black kid) I also love it when white families adopt black children, but if its girls, we have 'hair issues' so you need to learn about that. Many blacks would teach you, just go to a church thats multi-ethnic