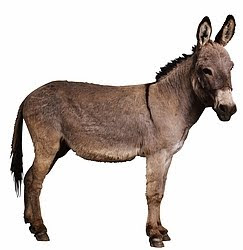 While I understand, and share, President Obama’s reaction to rapper Kanye West’s interruption of Country singer Taylor Swift at the VMA, I think Barack owes male donkeys everywhere an apology. Kanye is much more than a jackass, as intimated by the president.

I have to think that this was a planned stunt, designed to hog air-time and self-promote. Someone told me this isn’t the first time West has pulled this B.S. Kudos to Jay Leno for asking guest-Kanye, the following evening, what the rapper’s mother, now deceased, would have had to say about her son’s antics. For the first time ever, West looked humbled. He should have that look tattooed on his forehead.

Anyway, less my loyal readers think I have gotten soft on self-responsibility, have no fear, tis not the case. But I will ask the location of all this vitriol when former president Bush was putting us into this economic hellhole. FTR, Jimmy Carter nailed it when he said the LEVEL (not the existence) of animosity towards O-man is influenced by race. JC wasn’t the best listener as prez, but I believe he knows white folks, especially southerners, better than most.

This is over done please they should let it go already...

I don't know much about Kanye. I saw his rant and his apology on Leno. Both were sincere, I think. I don't believe it was staged I think he probably had too much to drink and his brain to mouth filter was turned off. I think Jimmy Carter likes to make himSELF look good. I think a lot of white folks like me are pleased that we put a black man in the white house. He's just the wrong one. I always thought Republicans would do it first since I don't believe the Democratic party has any interest in black folks except at election time (when they want something from you). I think they would be happier if black folks would just stay in their place. I find it ironic that I dislike Louis Farrakhan so much but agree with him on this. But the Republican have been ignoring the black vote for too long and likewise the black community should be engaging with the Republican party for their own good.
Carter did not emphasize the LEVEL of animosity, even if he used the word. It was clear what he was saying.

Jeff, I beg to differ - I have seen multiple Jimmy Carter interviews and speeches since his declaration. Each time he has emphasized the level/veracity of negative responses to Obama. Disagrement is one thing, witch- doctor, Hitler-analog, and "you lie" in the house chamber, is a clear step up. But, I will leave room that societal displays are just getting more aggressive all the way around, so maybe its a timing thing with O-man.

Yup, I and my friends thought the same thing, we figured it was all a set up by Kanye West in order to make someone’s career grow or prevent from going down…that’s Hollywood for you!!! Nothing is ever real expect maybe for some “real life” shows/reality shows, but even those, I’m sure, are edited to a certain extent.

What no one ever cares to discuss, as if it didn't exist, is the fact that racism also abounds against whites by blacks. It exists and is just as common, perhaps even more so that white against black racism.

But that seems to be a taboo subject. What hogwash.

What I'm sick of is the using of the race card every time someone just plain disagrees to throw the argument to a whole different topic so the original is swept under the rug.

Most of what has been described as racist in these pages and in the mainstream (liberal)media has no foundation in fact and there is no evidence to prove the claims and those claims are simply being used as a cudgel when logical argument fails.

Nancy Pelosi and her fake tears is a joke. She complains about how people act when she was one of the first insulting Americans by calling them astroturf.
If she wants to point fingers at people for having attitudes then she needs to point directly at her self.

I think that the racism towards black people has the added ingredient of bigotry in many cases than the simple ignorant phobia that is racism in general.

Say what you want, but I think Jimmy Carter is a plain ol' jackass and I do not think he knows white folks all that well. He is just another case of a white apologist with most probably deep-seated racism of his own.