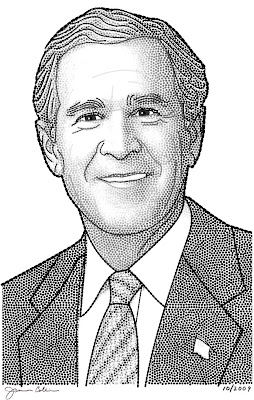 The last few weeks should have made things very clear to Americans. George Bush, as a president, has been a monumental failure. History is only left to argue his place among the worse of the worse. Some will say he had bad luck, like 9/11 and Katrina, but he has also betrayed any and all ideologies that Americans hold dear. He has effectively stuck the country with a sub-prime loan on our future. Dismal, very dismal.

Bush tax and oversight policies have failed our economy. Bush spending has failed the Republican platform, and made it possible that Democrats will control not only the presidency (a good thing), but also both houses (not a good thing). He lead us into a bad war, needlessly causing the deaths of thousands on both sides and wasting billions. He erased a budget surplus and doubled the country's deficit from 5 to 10 trillion dollars.

He has placed hand-cuffs on our crumbling education system, with No Child Left Behind, and done nothing while millions of citizens - families - are banished to the rolls of the uninsured. The impact reaches beyond our shores as well where, as Mr. Free World, he has stumbled and bumbled his way on a seemingly aimless journey, too often laid out by men of sinister character and motives, with names like Cheney, Rumsfeld, Libby, and Rove.

So whether you are an Obamamaniac, McCain supporter, or undecided, we are left with the stream of cold imploding headlines as evidence that the George Bush legacy is our country in one hell of a mess, which I doubt anyone will soon forget.

I started out in life as a Democrat but left the party decades ago because it was leading us to a welfare state. I could not connect with the Republican party because it has been taken over by the religious Right. So I have been an Independent for most of my life.

Being somewhat of a conspiracy theorist, I surmised that the powers behind the scenes that that pulled the strings, backed George W. Bush because he resonated with the “moron majority”. The kinds of morons shown in the previous post. I was somewhat sanguine that these powers were somewhat intelligent and put Dick Cheney in place to hold George’s leash. I was wrong. What a disaster.

It is unfortunate that you can’t get elected in this country without being a backwards-thinking superstitious primitive who still believes in good spirits and evil spirits and that all things happen by the will of the Gods. In this country they call themselves Christians. Faith is just a matter of believing what you want to believe, again demonstrated in the previous post.

That’s why I couldn’t get excited about the post about voting machines. The morons vote their own into power. Does it really matter which one is elected? You only have to hope they don’t do too much damage. At least we can throw the rascals out when they get too bad, like Nixon.

Nothing changes but the date and the names.

This article is about as spot-on as it can be. I think one of the reasons that Bush will be judged so harshly is not because he made so many horrible decisions in office, but because when he came into office the country was much better off financially and militarily than it is now. When Bush took office, the only thing that he had to do was not fuck everything up, but in a few short years he did just that. And the worst part of the it all? As governor of Texas for five years, he had plenty of "executive experience" that John McCain and Sarah Palin seem to think is so necessary to be in the White House.

Eight years of Bush is what will probably make me a lifelong Democrat, if only because Republican candidates refuse to treat us as adults by nominating politicians who feel the need to "dumb themselves down" in order to be accepted by their far right-wing base. Until they realize that you cannot run a country on gut instinct and cowboy politics, they deserve to sit on the bench for a while, even if that bench is at the bottom of a cliff.

While I am no Bush supporter it is absurd to blame the sub prime mess on him and only him. Dems like Frank had there entire creepy bodies in the entire mess.

what i think is funny is how obama claims that failed bush policies put our country in this economic situation. Just look at freddie mac and fannie mae. In 2003 bush proposed a new agency to oversee the two and in 2005 mccain cosponsered the Federal Housing Enterprise Regulatory Reform Act of 2005. in 2006 mccain said "If Congress does not act, American taxpayers will continue to be exposed to the enormous risk that Fannie Mae and Freddie Mac pose to the housing market, the overall financial system, and the economy as a whole." both president bushes reccomendation and the bill were shot down by democrats. barack obama voted against both. since 1989, Barack Obama is second only to Sen. Chris Dodd in most amount of Lobbyist money accepted from Fannie Mae and Freddie Mac.

Are you hearing this? He has been in the Senate less than four years and only Dodd has taken more money than he has. Since 1989. No wonder he wanted to keep Fannie and Freddie under Senate oversight.

And no wonder there isn’t an “Enron type” investigation going on. Nobody wants to investigate themselves.