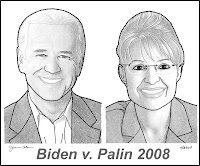 I know who I wanted to win the debate, but more importantly I want to maintain some modicum of objectivity. So here goes...

On one side you have Biden, a career politician and trained lawyer, with a penchant for an attack-dog style and putting his foot in his mouth on lesser issues (gaffes). Not a change agent, rather a consummate insider. He did not attack. He tasted none of his shoe. And said nothing he regretted. Still, always a bridesmaid, never a bride.

On the other side you have Palin, a political new-comer and self-proclaimed evangelical hockey-mom. Consummate intellectual lightweight (five colleges in six years). Runner-up beauty contestant, small-town mayor, small-state (pop.) governor. Josephine six-pack, campaign spokes-energizer model. Didn't mention seeing Russia out her window. Winked and nodded at the camera. Tricked by that sneaky gay question. Admitted to not answering questions if they don't suit her (just about all of them).

I call the debate a tie against their respective benchmarks, but Joe is clearly about 30 years ahead in knowing something about anything.

However, when you throw in the probability of either of them replacing their bosses, due to incapacity in office, (with all due respect to McCain) the winner is ultra-clear.

All that fuss over Gwen for nothing.
Palin knew the facts but I doubt that she understood what they meant.

I agree, I think Palin is good at reading scripts, nothing more. Her lack of any human response to Biden's emotional story is proof of the script.

Problem with Biden is he dosen't tell the truth. He may be a Lawyer but he gaffed on the duties of the vice-president by citing article 1 of the constitution which is wrong. He was factually wrong on many issues including his own voitng record as well as McCain. Palin may be a lightweight but at least she dosen't make stuff up as she goes.

I think the reason that she showed no emotion at Biden's outpouring was that she didn't have a pre-planned answer for that one.

What I saw on that stage Tuesday was two debates: one for the Vice-Presidency, and one for the Wasilla PTA Treasurer. Biden came across like the statesmen that he is, while Palin came across like a bad Pixar cartoon with her horribly forced accent, misplaced "folkiness," and complete lack of knowledge on any issue besides energy.

I think that the Republican Party has already found its next George W. Bush...

"The Senate shall chuse their other Officers, and also a President pro tempore, in the absence of the Vice President, or when he shall exercise the Office of President of the United States."

And both candidates were factually wrong on a number of issues. Palin incorrectly stated that the causes of global warming didn't matter as long as we found a solution. It is impossible (and Illogical) to suggest that we can fix a problem when we have no idea what causes it.

Thank your for blogging on all things important and interesting:)

With regard to an initial comment you made here is a question for you -- that is not specifically relevant to the debate, but rather, your interpretation of the debate:

Do you believe objectivity is attainable?

Objectivity is within reach if we are willing to accept any result. The office (holder) reflects the people. The people are no other place than where they appear to be. If and when they move to a different place, only then have they truly moved. Not before.

I should've tailored my question to be more specific, though:

Do *you* think *you* can achieve objectivity as a person who blogs on various political issues?

*No*. The best I can do is telegraph my objective attempt and let you be the judge, subtracting the influence of my words relative to my bias.

Our elites have decided that our new Savior is going to be president therefore the reason for pulling the economic trigger.

Biden is sexy as hell.