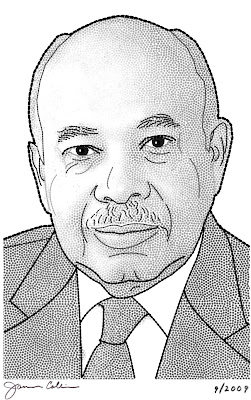 The literal white sheet has been pulled off of this former University of California regent, and leader of the anti-affirmative action movement. It seems that American Conservative magazine has unearthed Connerly’s get rich scam through eliminating AA. As I (and others) have said, his motives have never been about what is good for black people. And now we have proof that he is not even about saving whites, as he says, but more about lining his pockets with millions in silver coinage, Judas style.

However, I still say his burn-in-hell sin is not in dismantling AA, but rather in being too selfish and stupid to fill the void he helped create, with something that actually helps people in need – be they black, white, or anywhere in between. Denying that there are people facing up-hill battles, serves up greed and division that sentences them to hopelessness. I think AA has to go, but not without replacing it with something that gives a proper hand to 10 million blacks and 60 million whites which the current AA cannot reach. It is this entrenched status as poor folks that nails their shoes to barren floor boards.

Tricking the voters and cheating the system, the way Connerly and team has in the past, is no way to progress to a solution that eliminates arbitrary distinction for getting extra help. Poor folks need to step up, but the rest of us should send race-hucksters like Connerly on their way – as they help nothing, but their own selfish interest.

Wait a minute, I thought was understood that there were different brands of black conservatives. At the very least there are the Alan Keyes (white identified) types and the Tony Brown (black identified) types. Its two completely different worlds. Ward Connerly always seemed insincere and out of touch. He is from that Clarence Pendleton "stock". My method for detecting who is a sincere black conservative is trying to detect some form of a pseudo black nationalist, self help vibe. Connerly, Keyes, and Pendleton never had it.

Al: You have to admit that it is heckafied ironic to see the American Conservative tossing Ward overboard. Dude has got to be ripe, eh?