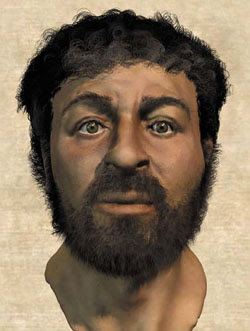 I have always loved science, but in 9th grade Dr. Guptil looked over his scientific methodology class and pronounced that we would spend 90 minutes proving, beyond a doubt, that Jesus looked closer to me, the lone black kid at the end of his wagging finger, rather than any of my white classmates. I thought to myself, ‘just wait until the folks hear about this'.

It is really pretty simple to ascertain the look of the people of Jesus’ day in his part of the world, what we now call the Middle East. They looked like Africans whose skin was a bit lighter due to the need to produce Vitamin D from lower sunlight intensity. It’s also easy to understand that people around the globe re-wrote and illustrated the bible to match themselves rather than indigenous Middle Easterners of biblical times.

This raises two issues at the minimum. How did skin color change? How could the bible be wrong? To the first, skin color is genetically adaptive to the intensity of the sun. It quickly lightens or darkens as humanity migrates northward and southward on the globe. This adaptive ability is required for humanity to survive. To the second, while the bible may be inspired by God, it was written by men who interpreted its events in their selfish favor, as in portraying its characters with white skin, beginning with Adam and Eve through Jesus Christ et al.

People, white, black and in between who do not understand the science of skin take the depictions in the bible to be literal and a sign of being God’s chosen over others of lesser depiction. While this allows some to feel superior, this feeling is based in ignorance and is the best reason for education, as it relates to genetics, heredity, and evolution.

It's not so much about rejecting a white Jesus I know to be wrong, but rather understanding the opportunity for God's directives to get mangled in the translation.

I've been thinking about this a lot. I always get annoyed at the Renaissance Jesus that is white with blue eyes and wish everyone would acknowledge the darker skinned Jesus and followers.

But here's my question--
Have you ever seen a collection of nativity scenes from around the world? All the people look different--they look Asian from Asian countries, brown from Latin America, black from Africa. Is it then ok for white people to have a white nativity set? Or has the power relations of the past five centuries destroyed that? Or at this point in time, should we embrace both the accurate scientific image and the multicultural nativity images?

I think religion suffers with inaccuracy, explained or not. And Black people suffer praying to a white Jesus placed to make others feel superior. More importantly, the bible is full of manipulations that fill the gaps of old and man-made failings of new.

I don't think it even makes sense to use the word religion and the word accuracy in the same sentence.

And for my part, as a non-Christian, this whole discussion is quite curious. G*d has a face? G*d has skin? Why do you think this???

And if Jesus is G*d as man, then he must be everyman, and not any man.

Do you think this might be part of the prohibition against depicting G*d that is fundamental to many, if not most world religions?

Does Jesus have athlete's foot?

I saw a poll once that said if Jesus came back as a Arab or BlackMan the majority of white people wouldn't even follow him. You can't realistically ever think you will get through to people who read one thing and see another and think it's alright. Might as well let Jesus be white and tell all the people who follow him that we should leave Christianity to the White people.

Have you read the book " In Search of Blacks in the Bible" by William Dwight Mckissic, SR? Its a good read, you will be surprised to find out who all else was black.....

On one hand, the whole discussion is about as useful as discussing the color of Bigfoot.

On the other, is anyone actually surprised that there may be a fallacy in a book written by man, for man, that is continuously rewritten to benefit those in power?

It is still changing, and always will.

If Jesus is everything people say he is, why would anyone be so vain as to create a photo? Kinda blasphemous to me.

Of course, that's a rhetorical question.

It does seem to excuse the whitening of Jesus to point out that other, differently colored peoples also portray him in their own image/color. But the corollary is only accurate at a superficial level. Most of those cultures are relatively homogeneous in racial terms, but America, especially, is not. So, in the American context, the whitening of Jesus functions as another mode of what I would argue is the ongoing fact of widespread white supremacy. Strong words, perhaps, but that's just because we've let the far-right racists hijack that term ("white supremacy").

That poll sounds fascinating, freemanpress. Do you know where I might find a report of its results?

I think that God has an odd sense of humor.
Jesus probably looked like what most other people would resent at the time.

Anonymous said...
This comment has been removed by a blog administrator.
6:00 AM

I completely agree. It will be interesting to see the reactions when people realize that Jesus looked more like Osama Bin Laden then Leonardo Di Vinci's portrait.

This is strange.
Why do people think of middle easterners and especially of levantine arabs/semites as light skinned africans ?

First of all, jews are very very closely related to the palestinians and lebanese/syrians and other people of that area. As far as we can see, jews are white. Maybe not europeans but they're certainly white. At least they're way closer to europeans than to black africans.
Then, i don't know if you guys have been paying attention but lebanese/syrians/etc are pretty damn close to white, if not outright white. Does saddam hussein look like an african to you ?he looks like some european guy with a tan to me. Does bashar el Assad ( syria) ? Do lebanese people (google them) look african to you ? There are tons of lebanese people in my city and those people are not blacks, not even close.
Next, even though there were crusades, there's no good reason to believe that the present inhabitants of the middle east are very different from their ancestors 2000, 3000 or 4000 years ago. I'm pretty sure they are the same. Most middle easterners have extremely deep roots in their area. Basically, I think they looked pretty much the same 2000 years ago as they do now.
If anything, they were even less black back then because this was before the arab slave trade introduced black african women ( women only) into the arab population.
Finally, there is quite a bit in the bible that suggests that the hebrews were light skinned people. I havent read the bible in a long time but aren't there many references to rosy cheeks, alabaster skin and being washed white as snow etc ?
I think this whole black jesus thing isn't going anywhere at all.

It's because the European Catholic church had a monopoly on the imagery, the paintings and so forth, for about 1500 years, that the world imagines Jesus as blue eyed.

But it's obvious that the 'semitic' peoples of the area, from the northern African coast to the inner middle east, are all dark skinned and curly haired. The Bible says almost nothing about what Jesus looked like, but that's a pretty good indicator that it DOESN"T MATTER. :-)

Jesus certainly wasn't what anyone could call "white". He probably looked like a young Yassir Arafat... as much as it makes any difference.