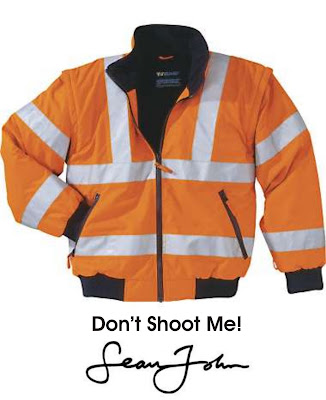 When I first heard the police in Bell’s case were pronounced innocent I thought, damn! Another Diallo! A black man in NYC needs to wear one of those bright orange 'don't shoot me' hunting jackets just to go get a cup of freaking coffee! Now I’m no lawyer, but those book types in Boston taught me a thing or two about the law, for all the money they took off me.

I told myself, calm down, and see what the hell happened. Is Sean Bell another Amadou Diallo? Now you probably know the details: one Jamaica Queens bar; three drunk suspects; one patron altercation; three undercover cops; one ‘yo, get my gun’; 50 conflicting witnesses; assorted car crashing; 50 police bullets; no actual suspect gun; one dead groom – and one resulting shit storm.

Two things caught my attention. First, the police defendants chose a judge rather than a jury to decide their fate. Judges, on balance, render more unbiased decisions than do juries, partly because appeals judges are more quick to overturn those same judges, if their administration or read of the law is off-base. So if you are innocent, going for the judge is smart. If you are guilty, better to take your chances with the pliable, but sacrosanct, jury system.

The second thing, all those bullets against unarmed men would seem to point to guilt, but does it really? The decision to shoot the first bullet is what matters, and this seems to have occurred after the intoxicated Mr. Bell used his car in a lethal manner against the unmarked police van. All remaining bullets are just poor marksmanship.

So from where I sit, five thousand miles away, I feel badly for Mr. Bell and his family, but unlike the truly innocent Mr. Diallo, Bell and his cohorts seem to have been the main precipitators of his demise. The prosecutor should appeal these verdicts, to prove them out, and then we should learn what we already know about even the mere talk of getting guns - it leads to people getting shot.

Lastly, the Diallo case was involuntary manslaughter at the least, come on America!

4/29/2007 P.S. My earlier post failed to present that while incompetence, as demopnstrated by the NYC police, may not rise to the point of being criminal, it is serious nonetheless and rightfully punishable. These officers face federal, civil, and departmental judgement and are not (nor should they be) off the hook for their actions.

I agree with you. It is a dificult one to judge. But in the back of my mind I also ask how the officers would have done in the Police Officer's Dilemma test?

I completely agree with you also. One if you are ever on trial, you should definitely get a judge trial (the judge has nothing to lose in the decision). Second, the cops had no reason to blow their cover and follow the guys out of the club with out a justifiable reason. Third, officers are trained to show their badge and say police. Why would they approach a car and individuals who moments ago were discussing getting a weapon without doing so. Fourth, officers are trained to shoot to kill not wound. If a moving car (which is considered a weapon) tried to hit an officer, they will definitely open fire on the driver and the vehicle.

I agree that the decision to shoot the first bullet is what matters. All subsequents shots fired were a result of the officer shooting that first bullet.

I don't agree with you. I do have to say I wonder if the same actions would have occurred if the victim had been white. Your remarks about "bad marksmanship" are in poor taste and I'd ask you to think a bit more before you write. And I don't see how taking time to re-load and then fire again constitutes someone reacting from pure fear.

Pamela: The decision to shoot-to-kill cannot not be made right or wrong by the number of bullets that follows the first. Also, reloading does not go to intent, but rather the continuance of threat. I apologize if my comment seemed unfeeling for the victims. Police need accurate aim to minimize harm to themseleves and innocents. I believe the NYC police behavior was incompetent, and they should be fired and the city held civilly liable, but it did not seem to rise to the level criminal, unlike the Amadou Diallo case.

simone said...
This comment has been removed by the author.
6:19 PM

WHY DO WE AS BLACK PEOPLE CONTINUE TO PUT OUR LIVES INTO THE HANDS OF THE POLICE...STOP CONDUCTING OURSELVES AS ANIMALS, AND MAYBE WE WILL GET SOME RESPECT!!

If you go to YouTube, you can find a video of Michael Moore offering free orange spray painting of wallets to black men so that the police won't "accidentally" make that "mistake". It's totally tongue-in-cheek, obviously, but he has a point. and your "coat" reminded me of it . . .

I disagree with you very strongly. In our cities, every weekend scores of drnuken white men leave bars and none so fare have been gunned down in the callous way that Sean Bell was.

Being an apologist for police crimes against anyone does not make you more intelligent. I just makes you a purveyor of the idea that when a black man is assaulted or murdered by so-called law enforcement he must be either a criminal or engaging in criminal acts.

Investigating why these officers would murder Sean Bell while endangering the lives of his friends and countless other city residents should be the cause of justice, not providing cover for yet another unwarranted shooting of an unarmed civilian.