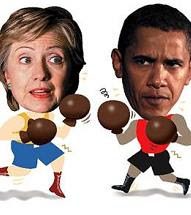 I watched the Hillary vs. Barack debate, in Philly, last night and two things came to mind as they squared off. The first was how we voters get sucked into thinking that the goal is to figure out the candidates and what they will likely do in office. WRONG! The second was how the debate reprised the Ali/Foreman ‘Rumble in the Jungle’ prizefight, whereby Hillary, with the help of the moderators, pounded Barack as he leaned back on the ropes. Only the election will tell if Barack’s ‘rope-a-dope’ tactic resulted in Hillary punching herself into submission, or if Barack is now permanently injured and should retire.

Each candidate is constantly tweaking their words to grab a few more share points of whatever voting block their pollsters are lusting for. The trick is to turn the right phrase or word, while avoiding the wrong phrase or word, - bitter is OK but cling is not - and never, ever, say anything where its specific meaning or context is clear. If you are lucky, your opponent will find no serial killers or registered sex offenders amongst your classmates from the first grade, else you be ‘hoisted without hesitation’.

I cannot argue with Barack’s rope-a-dope approach. Any winning swipe he takes at the Dragon Lady is surely going to end up in the headlines as, “Angry Black man slaps the hell out of poor little pugnacious White women – ending his bid for high office”. The best he can hope for is that the audience is so secretly embarrassed by this contrived ‘contest’ that they vow to regain their dignity at any cost. He cannot beat her, he has to let her lose on her own.

And one last parting shot, regardless of whether one wears a 24/7 flag pin or holds hands with the Mrs. in public, it don’t mean a thing. It’s all about what people think you are doing when no one is watching – and 'Billary' knows this like Oscar Mayer knows hotdogs.

Did you hear the truth?

I can't see where America really has a choice at this point other than Nader.

"It's better to fight when you have a small chance, than to wait until you have no chance."

@Tom... Nader? Have you heard what he said lately about the youth? He is not the same man anymore. He is riding off his own hype of yesterday now.

What did he say about the youth.

No one even brings up the obvious point that they are both socialists. Its a big sheep show. Either way you set a precidence if the Democratic party wins the presidential election in 08. Its either a woman or its a black man. Or we could be stuck with McCain. In any case our economy is gonna crash in the next four years.

Is he really stupid or just acting stupid?

Because capital gains are taken whenever desired, capital gains tax revenues go up when the rate goes down. This is fact, proven over and over again. Reducing capital gains tax revenues to foment class warfare is wrongheaded, bad strategy, and will be rejected. Obama thinks that going after the hedge fund managers will be more important to voters than their own retirement accounts and investments because he, like most Democrats, has failed to see that America has become an ownership society, and that the majority of Americans own what he proposes to double the tax rate on.

Amazingly, against all odds, the Democrats are going to snatch defeat from their nearly slam-dunk, no brainer opportunity to take over from the least liked president in our time. How silly to lose this election when all they needed to do was show up! But Americans do not want the most liberal person in congress to lead the country, and all he has to do is keep talking to remind them of why they don’t. All McCain has to do is keep his mouth shut and he will prevail against this kind of idiocy, when a few months ago, it almost seemed that we didn’t even need to hold the election…

How can all of you stand this?