Why Obama Needs To Indefinitely Detain YOU! 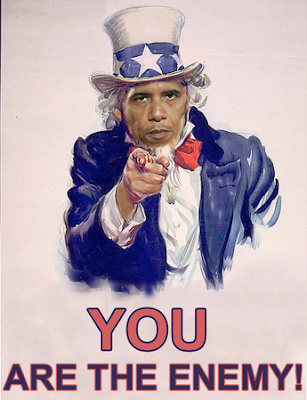 The Occupy Wall Street (OWS) et al Movement is leaderless, fragmented, and muddled in what it seemingly wants from those of various authority. However, what is not muddled is discontent with direct and indirect elites, and steadily reaching significant numbers that are willing to put their displeasure on the line – against batons, rubber-bullets, tear gas, pepper-spray, and arrest.

To date, the Occupy Movement, which has been labeled domestic terrorism by some, has mustered only short bursts of hundreds to thousands of protesters. But what would happen if rotations of hundreds OF thousands of people descended upon Washington or NYC, for weeks at a time, and continually harped on governmental failures? Mr. Obama’s conundrum gains some clarity. Clearing out these disrupters under the Jeffersonian constitution could prove difficult, if not impossible. The fundamental right to freedom of speech and assembly, AND due process, requires that whoever collects and detains these people also have ready and reasonable ‘processes’ for fair judicial rendering. Frankly, the country has no administration in place for such a constitutional exercise, either as a one-time event, and certainly not as continuous public theater, fueled by problems that are not going away anytime soon.

Hence, the president needs the unassailable latitude to label any citizen a terrorista, command the military, forcibly extract said disgruntled accused, and warehouse them in some rural barb-wired tent-city, INDEFINITELY or, until Prez figures out how to release them, ready to behave themselves. This is why the current administration needs NDAA 1031 on the legal books, constitutionally poisonous as it is. Detaining US citizens has little or nothing to do with protecting us from bona-fide terrorist, but rather removing the constitutional barriers to controlling free movement, assembly, and speech/protest – otherwise showing people who the ‘eff’ is boss. Call it a preparatory-step toward Martial Law (here).

O-man's Harvard Law Review plaque is looking like a Crackerjack prize right about now, and the late Steve Jobs may have been more right about a one-term Obama than his Siri could have ever thought differently. Or maybe Americans ARE as ignorant as the White House believes.

I have not heard any democrats say much of if not anything at all negative about the occupy mess. No matter what they do, the laws they break, etc., nothing.

Yet they talked cold hard BS about the tea party that kept within the letter of the law when protesting.

Maybe this bill is to detain law abiding citizens and possibly legal gun owners.
Even though the supremes have made their decision on the second amendment I am not sure we have heard the last of it especially if Obama gets to install any more justices. One supreme judge said it was the biggest mistake he considered made this year. It IS on the agenda.

If he tries to do away with the second amendment in any way that is when the sh*t will hit the fan.

I do hope the military and law enforcement will not support such a blatant disregard of the constitution.

Yes this bill concerns me and should everyone.