Why are White People White-Skinned? 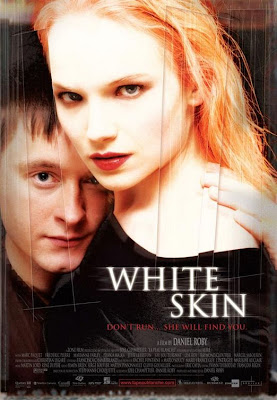 Being black, I scarcely wondered why I was black, but I did often wonder why white people were white. I never believed in the ‘God wanted it that way’ answer. It seems very natural that whites and blacks would harbor the same question, however taboo it is to toss it into conversation. Indeed, science has provided us with an answer, but I hardly see it in print for non-scientists.

The scientific record shows relatively hair-less humans evolving from hairy primates in Africa. At the time when hairy proto-humans ‘loss’ their hair and developed sweat glands for cooling their big brains, they also needed to adapt their production and regulation of the pro-steroid hormone, Vitamin D(3), which was critical to healthy bones and reproduction. The result was an adaptive higher level of melanin in the skin, turning it dark. Viola, healthy dark-skin humans to populate the world!

As early Africans migrated north to Eurasia, with its lessened sun intensity, dark skin posed a problem. Vitamin D(3) fell to unhealthy levels, except that built-in genetically adaptive skin traits quickly kicked-in to lightened skin responsible for producing the required D(3). The farther north they ventured the lighter the skin needed to be to absorb the right amount of sun. It really is that simple. There is a great book that explains all of this in detail, written by recognized skin authority, Nina Jablonski PhD., called “Skin: A Natural History” (here).

So there it is - latitude (north/south position) on the globe pretty much dictates skin color (here). There are a few exceptions to this rule, associated with levels of Vitamin D in the diet. By example, the Inuits (indigenous Arctic people) are relatively darker, even at such a high latitude, because of oily-fish diets laden with Vitamin D(3). Aborigines in continental Australia, arriving via the ‘intercoastal migration’, maintained their melanin through similar fish-rich diets, on the coast, coupled with the fierce demands of an intense interior desert sun.

As a side bar, and from a Vitamin D(3) healthiness perspective, the continental US is (on average) too sunny for most fair whites, and not sunny enough for most brown-skin blacks. Everyone needs Vitamin D management for good health.

Very informative!
I've always wanted a concrete answer to this question. I knew it had something to do with the migration to northern parts of the world but this makes things a lot clearer, thanks.

from email: "I now understand why most white people are white; now I want to know why most black people have dark naturally curly hair."

It's in the queue.

The ugly birth of racism among different races brought about a destiny killing complex that unfortunately still lives deep in the minds of many people today.