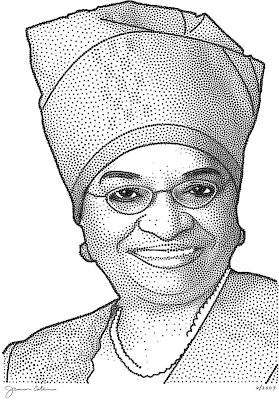 The President of Liberia, Ellen Johnson-Sirleaf, spoke at UC Berkeley last night on the liberation and struggles of her country. As the first female head-of-state in Africa, Sirleaf presents a yeoman’s effort in recovering the country from the sins of its former leaders. Her election 2.5 years ago was no easy feat as well, as prior to this she was nearly executed in a coup, imprisoned, exiled, and charged with treason.

The US has taken a significant interest in Liberia, along with the Chinese, due to the country’s strategic location and raw materials, but so far the president has shown a strong desire to be a friend of the US. The history of the country, lead by its founding in 1847 by freed American slaves, has US ‘fingerprints’ all over it, including its constitution and capital city Monrovia, named after James Monroe, fifth US president.

Sirleaf has taken a two-pronged approach to healing the country after over a decade of civil war beginning in 1980. Of particular note, she has pushed hard to reconcile the atrocities committed by child soldiers against Liberia’s people through counseling and schooling. Education is now compulsory and fully paid for by the government. Former warlord Charles Taylor is being tried for crimes committed during the civil war.

One thing that struck me was how ethnically different Johnson-Sirleaf appears compared to the contingent of Liberians attending last night’s event. I have since learned that the ex-slave ancestors of the light-skinned Sirleaf, upon their return to Africa, actually enslaved the indigenous people for a time, and an informal caste system based on skin color exist to this day. In fact, it was the historical disparities of race that fueled the civil war.

In any event, this impressive woman seems to be good for the country, and Africa could certainly use more leaders like her. She hammered away at the need to educate her people as the only way to liberate them from their struggles. She has my vote.

Update: As noted in one of the comments, the ex-slave founders were supported significantly by the US government (see American Colonization Society, ACS).

One thing that struck me was how ethnically different Johnson-Sirleaf appears compared to the contingent of Liberians attending last night’s event.

Funny how you wrote Liberians (how do you know?), and your dark skin countrymen you describe as blacks.

Caste system based on skin color exist to this day all over Africa, disguised as class hierarchy (Sudan is perhaps the most glowing).

"its founding in 1847 by freed American slaves"

I find this statement a bit disingenuous. The political and financial support for the venture was mostly generated by whites and the federal government. Many of the emigrants were free people of the North who had never been slaves.

It doesn't undermine anything else that you said, but this statement does provide a somewhat misleading depiction of the history.

Ellen Johnson-Sirleaf is NOT Americo-Liberian. She is of Kru, Gola, and German ancestry. It is her German maternal grandfather that explains her lighter complexion compared to the typical Liberian.

Also, many, though certainly not all, of the settlers were freeborn prior to leaving the U.S. It was the American Colonization Society that pretty much established Liberia, although the settlers did declare independence from ACS in 1847.