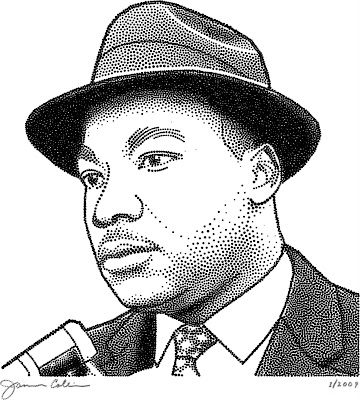 I just received an invitation from CNN’s Andrea Malter to mention, on this blog, the re-airing later this week of Soledad O’Brien’s piece, Black in America: The King Assassination, recapping the killing of Martin Luther King. While I think it proper to develop presentations of important historical events, I am against the grim annual marking of his death with a repeat. This is no different than marking the Kennedy assassinations every year in gruesome detail, or watching a repeat of Hiroshima/Nagasaki on the days those poor people suffered US atomic blasts.

In fact, I recommend that people not watch the CNN show on this date. Events invoking national catharsis are one shot deals that should, thereafter, be opened/re-opened in a constructive context for moving forward, be it at school, at home, or wherever. Memorial Day is our country’s day of public grieving for those we have loss. Marking King’s death in ceremony, of any kind, year after year, attach's him to the worst of this country, rather than the good he contributed. For me, commemorating his tragic death event and loss also distracts from the celebration, via holiday, of his birth and positive influence.

CNN has it all wrong. Commemorating dark days in this manner is about blame and guilt, and is not advancing for the country. These remembrances do not help blacks or whites to move forward with a positive attitude. It is simply a predictable reminder of the evil, past and present, embodied in the likes of killer James Earl Ray, and others who hate/hated King and what he pursued.

The media production of the circumstances of his death has an important role, but not as a shrine. We should never forget why or how King died, but we should also not re-open this aging wound every year on the anniversary of his death, and then expect progress to result.

Not to mention it's a lie anyway...

They will not tell the truth on the King situation anyway. One should read Dick Gregory's "Callous On My Soul" for the real scoop.

It's been real, but how about some actual photos on your blog now..

Anon 7:21, how about you get your own blog and cut&paste with all the skill you can muster?

Is it wrong to call that drawing style pointillism? I really don't know art scholarship.

In advance, I apologize to the blog owner, but I know ogunsiron, a commenter here, reads this blog, so I ask him to contact me via your blog entry:

Anon 7:17, Pointillism is correct, and within this stippling./JC