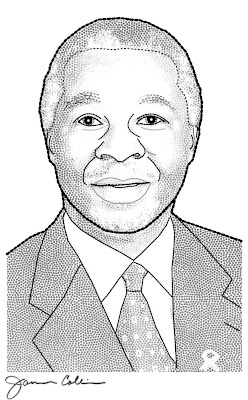 The xenophobic events in South Africa offer a good of example of how race and racism is a social construct and not one of real physical difference (Pres. Mbeki pictured). The killing of black immigrants by black South Africans, or the tribal killings between black Kenyans, are every bit as racist as whites killing blacks and vice-versa. The same was true when the English and Irish fought decades ago. The truth is that when we decide to kill someone because they are different looking, acting, sounding, or otherwise, we are hiding our true motives inside a bottomless trick-bag of superficial differences.

Furthermore, discussions of race issues are clouded by claims of inherent evilness, that hide true agendas. Black Americans look away from the issue of African-on-African violence with the same enthusiasm the group focuses on white misdeeds of the past instead of black dysfunction of the present. In fact, blacks and Africans have always exhibited the same behavior most deplored in whites, with the matter of degrees dictated only by available technology. However, to acknowledge this would eliminate the ability to guilt whites for simply doing what humans have always done - kill each other for self-serving reasons.

Whether you like his presidential package or not, Obama is the first candidate with an appeal to whites and blacks. Blacks were skeptical at first, because they have been conditioned by the Reverends in the us-against-them format. But by staying on message, and with help from Hillary and Bill’s race-baiting, Obama was able to scoop up the black vote to go along with disaffected whites. He has his faults, but his extension of Rodney King’s ‘can’t we all just get along’ into ‘working together’ is a hit. Unfortunately, while race issues threaten blacks, race is not the number one threat to this country’s future and this leads to questions of whether we are over emphasizing race.

We are living in a global mess, void of leadership. There is terrorism, energy politics, war, trade imbalances and deficits, immigration battles, and recurring natural disasters coming at us at every turn. But many in the world ask, smartly, how can they follow the US lead when our own 'house' is in such disarray? And this is why getting on a better racial footing is so important. Call it a precursor, or central to our future, either way it goes to credibility.

Great post! But, I must quibble (although I'm not sure that's a verb):

Black Americans look away from the issue of African-on-African violence with the same enthusiasm the group focuses on white misdeeds of the past instead of black dysfunction of the present.

Isn't this overstated? Surely most black Americans, like most white Americans, hardly ever hear anything about African-on-African violence, and when they do, and then turn away from it, do they really do with the same degree of "enthusiasm" with which they assess white misdeeds?

And what do you mean by "black dysfunction"? Are you saying that the institutionalized racism that so many African Americans recognize as such is not really as significant as something blacks should instead blame themselves for? I guess I'm not quite following you here.

Whether you like his presidential package or not, Obama is the first candidate with an appeal to whites and blacks. Blacks were skeptical at first, because they have been conditioned by the Reverends in the us-against-them format.

I doubt "the Reverends" have had this much power to condition black thought. I think black experience in general, in a society that continues to be perniciously racist, demonstrates to them that a black candidate who appeals to white voters, and who expresses such relatively low levels of sympathy with common black sentiment and belief, is considered by many African Americans to be worthy of skepticism.

I suspect you're not crediting black Americans with enough agency, enough ability to see for themselves that America still doesn't care for them as much as it does for white people.

Macon: We hear so little of Africa because not only do whites not care, but neither do blacks, especially when the message is not uplifting or unsupporting of the guilt-complex strategy. I would call US black support against apartheid enthusiastic compared to the response we see in black-on-black situations.

Also, I don't deny institutional racism, I just do not beleive it is at the front of the line of what holds blacks back. Black struggles of the past made more progress utilizing much less opportunity than blacks today. Complaining should not be a distracting excuse for what blacks fail to grasp into their own hands.

Lastly, I appreciate your supportive attitude, but only to a point. Inadvertently, you (liberally) appeal to human nature that accepts the easy route - help whites feel guilty, exact compensation, while remaining dependent. Dependence is too high a cost for transacting away white guilt for the ancestral past.

"blacks... and Africans have always exhibited the same behavior most deplored in whites..."

---Blacks THERE stands for Afro-Americans?
---Global MESS since?


I am an African, I am from Guinea-Bissau and BELIEVE me Africans HATE each others.
And most Africans WILL choose to save an EUROIPEAN leaving a fellow African to die, if he/she IS not from its people.
And remember TRIBALISM and NATIONALISM are the SAME.
One thing WE forget constantly, RACISM is not an INSULT, it is a HUMAN weakness, it is IGNORANCE, ignorance is not LACK of knowledge, it is NOT seeking TRUTH, it is FEAR.
I think we LIVE to seek TRUTH, and TRUTH is very fragile and RELATIVE.


About OBAMA's [I can bet - if it is possible] Afro-Americans skepticism, it has to do with the fact that he IS a son of an AFRICAN [I do not like colorism, BLACK/WHITE - its too REDUCTIVE, dark skinned ASIANS are ASIANS for example], a condition that WILL contradict the VICTIMIZATION propaganda of many so called REVOLUTIONARIES chic out there.


Euro-Americans [those called WHITES] Obama]s supporters ARE for their INTEREST [protecting ONES interest is what politics IS all about, and the RIGHT of any HUMAN].
And WHAT is EVIL in that?
I simple do NOT see any!

But WHAT is the INTEREST of most Afro-Americans or Africans?

To keep UP with the STATUS QUO, that is, so the victimization can carry on.
Sad but true.

This was a great post that I had to weigh in on.

Although racism toward African Americans is apparent, the dysfunction in the AA community is that most of us won't take responsibility for the part we have played in our own dysfunction.

When we grow up and then own up to the fact we are not where we should be as a people, the guilt complex that some AA's try to perpetrate against whites will no longer exist.

Frankly, I have had it with AA's who play the "get whitie/blame whitie" card to justify or ignore bad behavior. Some of the backlash and blanket misconceptions we get from other races is a bed we made.

Either we'll continue to wallow in that bed OR we'll find another way to skin the cat, 'cause blaming and guilting other people for our problems just ain't getting it.

I have also had it with the victimhood mentality I still see in the AA community. "We can't get ahead because the White man keeps us down so he can get ahead" is foolishness. When I hear an AA use that lame excuse, I look at that person suspiciously because something is missing.

The Reverends who supposedly represent our community have sold us this bill of goods ("get whitie/blame whitie") and a lot of us buy into it. That is, the ill-informed buy into it and the Reverends take full advantage of their ignorance.

Your response to Macon was pure genius.

Black struggles of the past made more progress utilizing much less opportunity than blacks today. Complaining should not be a distracting excuse for what blacks fail to grasp into their own hands.

You are on point with that statement. If our forefathers had less opportunity but made more progress than AA's today, what is our excuse??

Complaining is a lazy persons game that anyone can do. The work is in effecting positive change without blaming ANYONE for our failure to progress.

Inadvertently, you (liberally) appeal to human nature that accepts the easy route - help whites feel guilty, exact compensation, while remaining dependent. Dependence is too high a cost for transacting away white guilt for the ancestral past.

AA's have the ingenuity, the means, and the opportunity to overcome any obstacle placed before us.

Why we haven't progressed further than our forefathers is we continue to wait on someone or something to take us by the hand, like little children, and lead us to victory.

Insightful, thought-provoking post, James...I have your site bookmarked. I will be back to get my next fix.

If you haven't figured it out by now, I'm an AA woman and I approve this message.

It's not about "racism" since "racism" can't exist unless "race" exists, and we all know that "race" is a white supremacist fantasy concept. It's the most-discussed scientific concept that has no basis whatever in science.

What's it's really about is color and ethnicity-aroused ideation, emotion and behavior.

Meanwhile, there are six US States that are over 20% Black that will not have a Black blog credentialed to report from the Democratic National Convention.