White Guilt - What's Obama Got To Do With It? 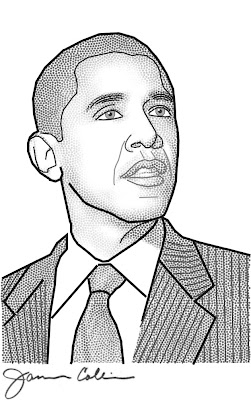 Many people are pointing to ‘white guilt’, as the explanation for the phenomenal rise of Barack Obama in the presidential race. It goes that supporting Obama somehow makes some whites feel better about themselves, relative to their stations and the history of this country’s mistreatment of blacks. Author Shelby Steele has been, perhaps, the most vocal of those who would say Barack is sneaking in the white-guilt door, and of course Steele conveniently has a whole book on the subject.

It would seem that guilt, as a motivator deserves a little better treatment than the simple ‘either or’ variety. It may also be that whites either feel guilty or, better yet, they may feel bad about being made to feel guilty. Which is it? I argue that their behavior is more the earnest attempt to eliminate the traditional guilt model for looking at blacks, rather than the mere reduction of guilt feelings. The first is laudable, the second is not.

The underlying guilt-model originates from church, where doctrine tells us to confess our sins and all will be forgiven. The emphasis is on contrition and forgiveness, with a dose of ‘do not do that again’ for the future. Mr. Shelby would say this model applies to present sins, rather than those past, and therefore white acceptance reflects a slight-of-hand manipulation. He would be right, if only the conversation was about Reverend's Jackson, or Sharpton, running for office.

However, there is also the behavior that looks for solutions among tired ruble, in this case a leader, who moves us away from doing some bastard-version of good for assumed reasons of guilt. Yes, the past influences all plights, but should the behavior of kin require the re-enlistment of each generation's pound-of-flesh, as payment for those sins? Some voters are saying no. But in doing so they are not saying no to the plight of others, just to guilt as the motivator for getting their attention and support.

Obama seems to represent an option, in some minds, for moving towards better solutions, minus the scarlet letter if your skin happens to be white today. Good for him, and us.

What's guilt got to do with it?

Obama's speech on race mimics the thoughts in my own mind.

- I think race relations are a problem
- I don't think it's easy to talk about it yet
- I think racism exists on both sides, hurting both sides
- I want change, not to ease guilt, but to stop the cycle of suffering, which gets worse, I believe, with every generation
- We can't ignore the 1000lbs elephant in the room any longer. It helps no one.

I think the Press is in a corner at this point. The "dream" candidate of the liberal left, Hilary Clinton, Is not leading by the landslide they believe she should be and that they are at a loss to explain why.

I fear that Obama will embark on some crusade to save the black man at the expense of the stability of the Country, far less than I fear Clinton will do the same for women.

Is that White Guilt? Or is that just paying attention to the history of the candidates and thier championing of previous causes?

Maybe Obama isnt ahead from "white Guilt", Maybe hes pulling ahead because of "Male Fear" ;)

I disagree. A rising tide lifts all boats, and if Obama really can save Black America (because we do need saving in many ways) then that would only make the country more stable, not less stable.

I wasnt saying that he would not do good things for black americans. I was thinking more along the lines of more of the same thinking that brought us HUD, and other "social equalization" programs like it,that have left nothing but devastation in thier wake. More socialism, which is always bad for everyone (except politicians), with Black american liberation as his EXCUSE.

Hilary is using the "women need a hand up/protection" racket to push her socialist agenda rather openly. I just worry that obama will do the same, AFTER hes elected, with Black Families as his excuse instead. Same policies, same socialism, same result.

Anonymous, because google asks too much

Black people don't need a savior and should stop looking for one person (other than Jesus) to be their savior. Instead Blacks should concentrate on mobilizing themselves as a group through economics and education.

The driving force behind Obama has a lot to do with his multi-ethnic background and upbringing along with the fact that many youngsters are themselves interracial. Some people actually care more about where their social security went than they care about what color a person is.

I see a lot of people who are white voting for Obama, as a way of making up for their fear of helping an African American Person in person.

Voting for Obama is easier than hiring that talented kid who applied, becuase B.O. looks and feels like what we (white ) want; where as that kid scares the b.j'ees out with his dreads.

No this is not everyone, nor should you take this as such. But, I have found that to be true, as is teh reverse where he never would be chosen.

It is an interesting election cycle, as three of our "oppressed" elements of our social fabric is running.

A woman, trashed by her husband and slammed about by all.

A Vet, hanidcapped by war and will never be able to the wave at a ball game.

An Educated African American man, son of immigrants and kin to family that believes in a religion we see as the boogeyman incarnate.


I think it would be easier for all of us , if the choice was tween one and someone of the power clan.

I support Barack and not Hillary, even though I am a white professional woman in my 50s. I do this not because of guilt, but because as someone living in Memphis, Tennessee, home of MLK's assassination and a majority black city with more and more whites moving out, I believe he is someone like many of my 35ish black friends in whom I see the hope for our future.

Has progress been made since 1968, when National Guard troops were on my suburban street to protect us from those rioting black sanitation workers? Yes. And he and my young friends are proof of that. But is there a lot left to be done? Yes. And if we can't be honest about that and say things that are uncomfortable to say and hear and see the human individual in each person we encounter, wrapped and sometimes totally hidden in their racial experiences - yes, but still a human - then we go nowhere.

I can't remember in my adult lifetime being spoken to by a politician as someone who can handle the truth. It is so refreshing.

We all tend to be blind to our prejudices and don't want to face them. I'm holding my breath for the day when like Michelle Obama I am proud of my country for once. I hope that day comes in November.

Just to represent an unpopular view here: The conservative challenge is to try to separate rejection of Obama's policy without being seen as rejecting his race, which will be nearly impossible. Everyone understands race, but a majority of voters don't understand the mechanism of government growth and the increased taxes required to pay the costs of that.

From my perspective, I fear that the racial issues (white guilt, black identity, diversity, whatever) are going to carry him into office despite his stated plans to raise taxes, grow the government, etc. All of our collective and varied racial motivations are going to outweigh and obscure his policy plans -- people want him regardless of his positions, rather than because of them. This is made even more true because of his lack of actual tangible political history, while we have all too much of Clinton's. (This morning's headlines:"Hillary was in the White House on 7 occasions when Bill and Monica...") (A favorite Austin eatery had a t-shirt that said "I did not have TexMex with that woman!")

We know what Hillary would do, and should she get the nomination, I predict that voters will reject that, but even knowing what Obama says he will do won't cause his rejection, (even though I think it should). If he is nominated, he will beat McCain, and then the fun will start. I just hope he gathers some competent people -- it would be terrible if we had another Jimmy Carter.

That would be an interesting comparison I would like to see explored, actually. Carter was a new guy, agent for change, first of the overtly religious, seen as smart with no actual political history to soil his image, and in my book, he was a total freaking disaster...

At the end of the day Obama is just anohter politcal dog, the same as all the other candidates. I can honestly say there was never a time when any president did anything to make my life easier. Instead of putting blind faith in one person, people should learn to work together to improve there local communities.