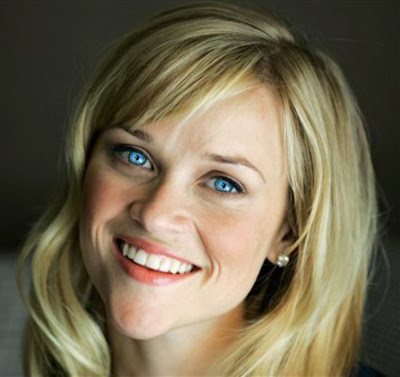 If you were not fortunate at birth, like actress Reese Witherspoon (pictured), science just might give you another shot at blue eyes, but caution is advised.

Gregg Homer PhD., a Los Angeles area research scientist, is working on a procedure, dubbed Lumineye, that will turn brown eyes blue in a mere twenty seconds - and $5,000 (US). Homer's procedure entails beaming a laser onto the top layer of the iris (pigmented) portion of the eye. The laser 'agitates' the iris - some might say it 'burns' it - and the healing process carries away the tissue remnants, leaving an non-pigmented iris ready to reflect blue to its beholders - Hollywood here I come!

It seems that some eye professionals (and me) 'see' a problem brewing with Homer's invention, as pigment in the eye is protective, so permanently burning it away is not insignificant to long-term eye health. In fact, this blogger has previously written about blue eye problems (here).

Others have taken issue with Homer's ethics in pursuing an expensive, dangerous, cosmetic procedure that re-enforces blue eyes as a pillar of human beauty. Homer arguably believes his Jewish roots preclude his pursuits for reasons other than the best intentions. Huh?

Nevertheless, Homer's research continues with the objective of having the procedure available outside of the US in eighteen months, and on US soil within three years. The close-up photograph shows an eye that has undergone the procedure on the bottom half of the iris. 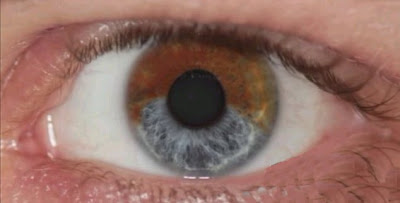