Obama Politics: Banks Get To Steal Homes for $2,000 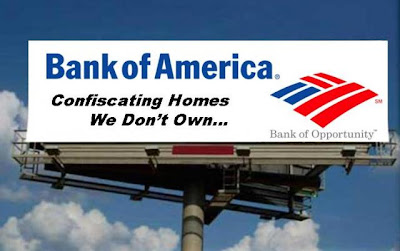 If it looks and quacks like a duck, then it's a duck. Even if it is black.

The Obama Administration just pushed through a $26 billion settlement with the banking industry for 'improprieties', calling it a win for the victims of the Wall-street engineered, mortgage-backed securities, scam! Ha! How is getting your home stolen away by the bank, for a measly $2K, a win? That's something like a penny returned for every dollar stolen! The reality - it's an election year and Mr. Obama needs to manufacture some smoke to blow up Democratic voting butts, and this is it. Get ready to hear about this alleged win, over and over through November, until you puke.

A statistical sample audit of foreclosures in California showed that 85% were illegal, meaning the banks broke that law in 85 out of every 100 cases (here). AND NOT ONE BANKER HAS GONE TO JAIL! Has anyone seen Mr. Eric Holder, the Attorney General?

Considering that black people, voting for Mr. Obama in mass (past, present, and future), are at the front of the long line of hues getting ripped-off by the banks, Obama and Holder need to return their cards, and go sit in the box with Ward Connerly. After all, a duck is a duck, regardless of the color of the feathers.