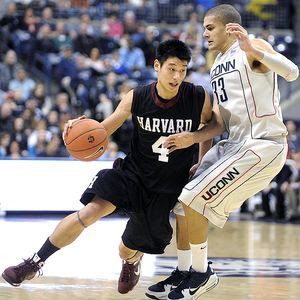 Harvard Alum and Knicks basketball star Jeremy Lin has earned all the positive attention he is getting, despite comments from idiots like boxer Floyd Mayweather, who try to detract from his recent media recognition (here).

Now I ask, how is it fine for Black folks to beam with pride from the attention received upon members challenging all manner of barriers, but if somebody else does it (in this case someone Asian), 'it ain't no big thang!'? That's just ignorant and racist. And don't tell me folks can't be racist, either.

While Mayweather clearly does not speak for all folks, his comments resemble others who are similarly stupid.

If someone says Jeremy in Oakland, the only question is if it's Black Jeremy, White Jeremy, or Asian Jeremy? - as it should be.

Hopefully, this will give nationally ranked Cal Basketball standout guard, Jorge Gutierrez (here), some inspiration in his game, too.

A wet-behind-the-ears rookie from Harvard winning an NBA game with a clutch three-pointer at the buzzer - now that's LINsane! (here)