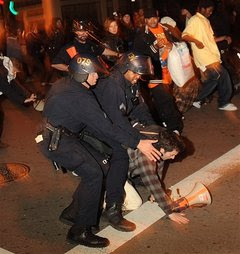 Tomorrow’s (today’s) story. A Los Angeles County jury convicted former BART officer Johannes Mehserle of involuntary manslaughter, in the killing of Oscar Grant. This surprise verdict is the least severe of the guilty options available. Over the coming days we will find out what the jury was thinking, if they choose to reveal themselves. Until then we can only wonder. Do not be surprised if the Feds (Justice Dept.) step in and charge Mehserle.

Last night’s story was one of anarchists against the Oakland PD, with a side order of thuggery. There was an expected protest gathering in Downtown Oakland, over the verdict. All was peaceful until darkness, when the uninvited anarchists reared their heads. They are easily identified as young white adults in hoodies and masks, with a determination to provoke the cops. Mix them in with a smaller group of black thugs, with an eye for footwear, and the result is a trashed Footlocker store. BTW, the majority of the arrests were ‘anarchies’.

At first, I thought the OPD were making things worse, but through the night I changed my mind. If the white thugs were hell bent on a fight, then the OPD tactic of pressing everybody into a one-block thoroughfare definitely focused, and limited, the damage. I do not think there was a totally peaceful way to relieve the crowd. It was clear that too many of these knuckleheads came to dust it up. This OPD coolheadedness was in stark contrast to earlier bumbling, at the time of the killing a year and a half ago.

What I learned? Less-lethal tasers should NOT be made to resemble deadly firearms, and should, at minimum, be all-orange or yellow. Living or dying should not be subject to split-second confusion! On Mehserle, the judge in the case will get the last chance to raise the bar on the value of life on BART platforms. The final verdict rest somewhere between 5 and 14 years in prison, meted out on August 6. Stay tuned.

Here is my complete honest opinion. I watched the videos on youtube of the incident. After he pulled out his gun, Johannes Mehserle, looked at his hand, put his hand on his head, then looked up at the other officer. To me he looked shocked. I think this was an accident. I think he meant to pull his taser. Why he was going to use the taser? I have no idea. But the videos that were recorded do not show the full picture. I could never see what Oscar Grant was doing because there was always a few officers or random people in the way. I think the adults/teenagers/children that were at the train station were out of control. They were loud, walking around everywhere. If I was an officer I would be on guard and nervous. These officers were clearly outnumbered. They didn't know if someone was going to jump out and do something. These individuals clearly had no respect for the law. Oscar Grant has a history. And I don't think that this justifies what happened to him, but this gives more reason for the police officers to be very cautious. I think Johannes Mehserle definitely made a mistake. And I think involuntary Manslaughter was the perfect charge for him. It won't bring Oscar back, but this officer did not murder him. He did not plan this incident out and unfortunately it happened. As far as the protesters.. I believe they need to calm down and why protest? The man is going to jail. He is remorseful. He didn't do it on purpose. I understand the police officers in California don't have the best reputation, but two wrongs don't make a right. Don't go out their protesting and causing more problems by being violent and acting a fool. At least if they are going to protest, do it peacefully. I think this case was a bit sensitive, especially because the officer was white and because the police in this area aren't trusted by anyone. But as an outsider I think that justice has been served. He didn't deserve a murder conviction and thats why he didn't get it.

have you looked at the photos of the protest? did you not see how the crowd was racially divers and the majority of the people weren't your stereotypical black bloc anarchist?

What does that have to do with my comment?