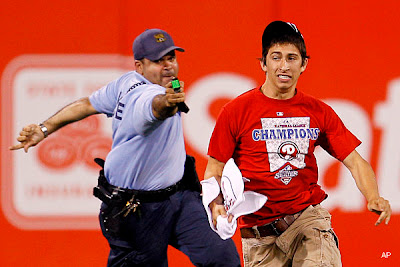 When I saw this I immediately thought I should start my own stuff-black-people-would-like-to-do-but-can't blog. I can just imagine what my parents would say if I had ever decided to disrupt a pro baseball game by running around the field like a kid who just downed his first half-a-beer. But in this case, there was a rotund taser-toting Philly cop with his own ideas.

Rather than continuing to chase the seventeen year old in circles, the chubby cop took aim with the electrodes and dropped him (here). This was prior to needing to call in his own ‘dunkin-donut-code-blue’, or worse, having to self-tase his big butt back to life. In fairness to the cop, who was reviewed and cleared of using excessive force, recent of these joy-runners have proved themselves armed and dangerous toward on-field personnel.

What’s kinda’ funny, besides seeing the kid crash and burn from the shock, is to consider that prior to hopping the barrier to the field, the youngster called his dad and asked permission for the stunt. The dad curiously said, “I don’t think you should.” Now, my pops would have said something a little stronger like, “I’m gonna’ whip your ass for even thinking about doing something so asinine”. But hey, my old man was old-school.

Furthermore, if my folks came to bail me out, after such a stunt, I would suggest that it’d be safer for me to stay on ‘ice’ for a few days until dad’s BP (blood pressure) came down to triple digits.” In contrast, the offender’s father wasn’t too bothered, except for the tasing, saying his son was ‘just a teenager having fun’. I guess growing up White still has a few advantages.

Now if the penalty for this was a public tasing of the father, the world would be a better place.

What does this have to do with "Growing up white?".

The kid's an epic douchebag and to the author, my dad would've said the samething.

Anon 6:04, I was referring to the dad's 'boy will be boys' attitude. This is a luxury of some, not all, Whites, and never a domain for Blacks. That's all I'm saying. The title is tongue-n-cheek for all my Whites bros. No offense.

I have to wonder if a black kid ran out on the field like that would he have been tased.
I am thinking the security guy would have held off a lot longer as to not antagonize the folks ready to jump down his throat for tasing a black kid and that issue surely would have been brought up as racist in some way, shape, or form, by some blacks in the news.

"When I saw this I immediately thought I should start my own stuff-black-people-would-like-to-do-but-can't blog."