#12 Blacks and Swagger, Obama too 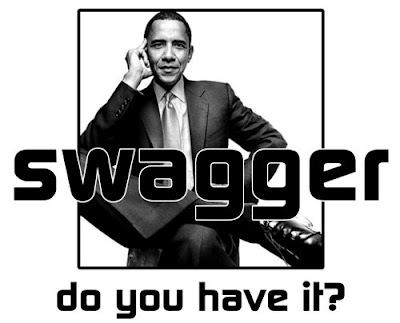 In the first place, what is swagger? Objectively, swagger is a calculated display, and waste, of resources designed to communicate supremacy either to the competition or an object of desire. Rich guys, like billionaire Larry Ellison (Oracle), throw away money in plain sight, so that everyone knows that there is more where that came from. Ladies look like the display windows at Neiman’s, while they are buying groceries. Athletes strut to show muscle strength and readiness even when no threat or competition exist.

Different ethnicities have their versions of swagger. White guys wear their hair a certain way, Black guys do the same. But swagger starts at puberty and, I have just found, is best observed at co-ed high school track meets (including my son) where the young swaggees are wearing skimpy uniforms and embroiled in physical competition. These meets are a veritable gold mine of unadulterated swagger, White to Black, male to female, freshman to senior.

All colors of the boys have the basic swagger of walking on their toes (metatarsals), to show off their instant readiness to ‘Usain Bolt’ to some finish line into the first place spot light. The top tier girls wear tight everything, letting nature show itself off. More pronounced toe-walking and tight clothes equals speed, if you check the results. The kids add to this flair by wearing their accessories in the manner of professionals, Nike preferred.

There’s more swagger in the glamor events, the sprints. I suppose this is because running speed is the most basic of all competition. You run to get what you want, and away from that which wants you (for a meal). The boys have fancy haircuts and sunglasses, the girls get the fingernails and hair looking like they are headed to the club after the meet. The 3000m winner, a White kid, had a bit of well-earned swagger, but I think he has already seen too many swagger-less Kenyans, so he was dialing it back.

Finally, no swagger discussion is complete without recognizing Obama’s swagger. He walks like those kids. He is on his toes, like he is ready to bolt at a moment’s notice, toward or away from a threat - I’m not sure. I can’t think of an earlier POTUS, except Jack Kennedy, who had this particular physical manner of communicating readiness. BusinessWeek claimed (last week) that Wall Street is liking O-man, despite concerns, so he's still in the race even with the 'help' of FOX NEWS.

I’m not sure if it is racist to expect this from him, or to like it, or, god forbid, to have been jazzed by it at vote time. Is primal influence legitimate in this complex world? Perhaps, but it exist nonetheless.

Ha ha ... the more swagger, the more I am wary of the actual inside content. Most are easily impressed by outward show. I suppose it's in our lower nature. Kenyans don't have to swagger; they (and you) know they are going to win. A natural air of quiet confidence that is above the rest. Maybe "swagger" is just a hope that you will have "the right stuff." Kind of like "fake it till you make it."

I love a man with swagger. I think you have the wrong concept of swagger. Swagger is how you carry yourself. It has nothing to do with what you wear, what you have, or what you look like. It's the x factor that can make an unattractive man (lil wayne) stand out. It's Je ne sais quois. The thing that you can't put your finger.

I have to agree with Ms. Negro. I believe your concept of swagger is wrong. Swagger is more attitudinal, more akin to confidence, a self-assuredness, or as Ms. Negro rightfully states, the way one carries oneself.

I think an example that illustrates this can be found in sports analysis. Sports analysts often describe a team as having a certain swagger or not. This doesn't have anything to do with their uniforms or appearances as they are identical - same uniforms and players with tats - they are referring to the manner in which they are playing the game, either with confidence, like they are going to win or playing like they're scared and uncertain.

What you describe seems more like pretentiousness, ostentation or simple trying to be cool. There probably is a context in which you could use the term swagger to refer to someone falsely trying to portray themselves as supreme, but it is not the predominant use of the term today.

These idiotic commentators are making a distinction without a difference. Swagger is "confidence" when you can back it up, and "arrogance" when you can't. You can't tell the difference until push comes to shove. There are many psychological factors that go into it, and it's one of the main reasons why black men so often exhibit fear-of-failure behavior - i.e. dropping out of school, avoiding the labor market, shunning marriage... They don't want to risk their "swagger" by taking on a real life challenge.

Idiotic? I've been called many things but that's a first. The point of my comment was to state that I believed the blogger had the wrong idea, therefore the idea behind the post was a lil off (albeit the almighty swagger is worth talking about).

You seem to want to get into whether or not some people can or do live up to the qualities that their swagger suggests. And then separate the those who can and those who can't into two separate categories. That's your business but again wtf does that have to do with my post or how does the fact that I chose not to comment on the "hype vs reality" aspect of swagger make me an idiot?

I think you, anon, are the idiot here.

You know as well as I that obama pick up the 'swagger' in college. probably to get Michele. He wasn't raised around ANY black people. he was raised by his white grandparents and his stepfather. none were black. he probably just keeps it up because it pleases Michelle.

oops, I meant the type of 'swagger' that many black people talk about.

"There are many psychological factors that go into it, and it's one of the main reasons why black men so often exhibit fear-of-failure behavior - i.e. dropping out of school, avoiding the labor market, shunning marriage... They don't want to risk their "swagger" by taking on a real life "

I think black men exhibit this behavior because they want to define a MAN in their own definition. They believe a man has a main chick, and more on the side, that having a wife, means you are "whipped or tied down". They drop out of school, because they believe it's a white mans education. They avoid the labor market, because they don't want someone talking down to them. They'd rather sell drugs and be called the nigga on the block. Btw, I am Black and Dominican.

And last but not least, hip hop culture tells the black man in America that this behavior is correct. Hip Hop reinforces this idea by giving example through music and videos.