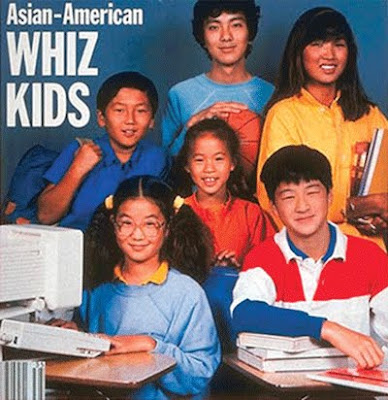 Unless you are from Neptune you know that Asians are good at math, among other things. But do you know why? I did not. Is it OK to ask this question? I say yes. Sure, some people might say this is a stereotype, and therefore the subject should be off-limits. To this, I say nonsense. There is something valuable in understanding why a group shows a result tied to ethnicity, positive or negative. If we don’t properly study these things, people are left to make self-serving idiotic assertions.

Relative to Asians and math, I was further intrigued by the circumstance of my neighbors, a Japanese family that’s been in the US for eight years. They have four boys from 12th to 4th grade. The oldest three boys, born in Japan, are high achievers, while the youngest is below average and worrisome to the family. On top of being a bit pampered, he is the only one that has not attended Japanese school (on Saturdays) and does not speak Japanese. I suspected that these differences matter, and there is research to support this notion.

Stanislas Dehaene's, Professor of Cognitive Neuroscience at the College de France (here), has researched Asian language numbering systems, which are remarkably brief, easy to understand, and aid the memory. He also found that more numbers can be accurately held in memory, via these languages, compared to Western languages. Add this advantage with another piece of data, where Asian cultures score high in the persistence category, and the result is killer math scores.

My neighbors, as a single data point, offer that these cultural advantages can be mitigated if you replace the language and weekend Japanese school, with a new inconsistent language/less persistent culture. By example, in Japan the school year is 243 days versus 180 in the US. Long summer vacations are ruinous to gains.

I am not arguing that Asians are or are not smarter, rather I am saying that groups thrive or stumble based up cultural influences that go much farther back in time than we think.

They may be all that,yet the Americans owned them in the war.

And as for all this education, my thought are that the time is fast approaching when the only skills needed will be purely agrarian. Back to basics.

The length of the school year is a huge advantage, not only for Japanese students, but for much of the EU. More time spent is more knowledge gained.

This is something I'm pushing for on my local school board, but the push back from the teacher's union is huge...

Children are so institutionalized already....daycare, pre-school, headstart,after school care. I think kids need a quality education in the hours they are in school,and more family time. I realize with both parents working, this is near impossible. I'm just saying, ideally...

Hey James. My (brown-skinned) niece has had Asian friends her whole life. Matter fact, she was included in their special Saturday two-hour math classes since second grade.

Throughout her school years, she was hanging with the Asians for that extra dose on Saturday.

She's now an accounting major at a big university.

I think you just discovered a way to close the black-white academic gap: teach black kids Japanese. Someone should seriously try this and see the results.

The Chinese are also noted for their academic success, and while many theories exist as to why this is the case, the one I find most plausible is this. China is a third world nation in the midst of an economic boom and education is seen as the way to secure a future as a world power. America has been a world power for years and I think some people have lost sight of what it means to lack that level of affluence. So we have people questioning the benefits of material wealth, achievement, etc. I don't mean that there are no downsides to those things, but rather that I would prefer to have them than not have them.

Additionally, most Chinese are only allowed one child, upon which all their hopes and dreams rest. When that one child is your only shot at a decent future, and that decent future can only be obtained through a good education, failure just isn't an option.

Ultimately, I think it comes down to whether or not someone values education. Do you have the ability and the willingness to learn what you need to learn to make yourself employable, and can you see far enough into the future to realize that a failure to do this will get you nowhere.

As for Japan, they, too, are relatively recent entries into world power status, going from an agrarian, feudal society to a superpower. So I think similar dynamics may be at work there as with China.

Then again, America is a fairly recent entry onto the global stage too. Maybe demographics has something to do with it. We can't agree what to teach, how to teach it, what language to teach it in, etc. Japan is much more homogenous so there arne't these kinds of conflicts.

"Ultimately, I think it comes down to whether or not someone values education."

I agree with this statement. It is so very true. Some of the African American youth do not value education. And neither do their parents. The importance of education should be taught to children at a young age. We need to talk to our children. We need to let them know how this country works. At least tell your children to get a trade. Be something and be the best at it. But the truth is, the children who never make it through high school, probably had parents that never gave them the talk. They probably had parents that didn't care. Their parents didn't discipline them enough, they didn't do enough for their kids. And I hate it when people say, oh, well I work 2 jobs and I can't do everything. My grandmother would tell me how she had to work 2 jobs and care for 4 children with her husband. Not only did she have to work 2 jobs but she had to deal with racism on an everyday basis. They always worked and the kids ended up taking care of themselves, but every chance she got she would tell them, look at me, you don't want to be like this, now you have an opportunity. Go for it. She never forget to tell them how important it was to be somebody. She never forgot to discipline when one of the kids brought back a low grade. Its not that hard. Some parents are just lazy.