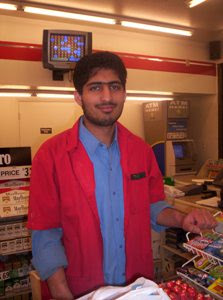 I stopped by 7-11 tonight to get some beer and got a bit I did not expect. As I approached the counter, the customer in front proceeded to engage the two Middle Eastern check-out guys in some chit-chat. They went along with his jovial banter and I thought nothing of it. As I put my stuff on the counter, the other customer exited - and then it got interesting.

The first checkout guy turns dead-pan to the second and states in a heavy accent, "so what do you think?", nodding toward the door, "gay or straight?" Huh? I must have had that WTF look on my face. The second guy looks at me with an ‘oh-shit’. And time froze.

And then time thawed. Second guy nervously interrupts, saying, "he didn’t mean anything, he thinks he is a comedian”. “Yes”, says the first guy in a serious face, “I think I'm funny”. I pointed at the first guy and said sternly, ‘look(!), for the record, I’m not saying shit to you or him, so when I leave, you better not ask your friend shit about me, you understand?’. Time froze again, for as long as I could hold my mean-mug. Then we all busted out laughing.

Call it a Rodney King moment if you like, we were just getting along.

I read this last night and it stayed with me. It's moments like that that make you think that we may just be bigger than the problem, and just maybe we're capable of moving on to more important things.

Thanks for posting this.