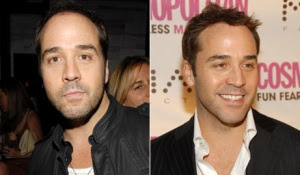 Note: By popular demand I will look at attraction issues and black men. But understand going in, there is scant research on the subject.

Everywhere I look I see walking and talking advertisements for hair restoration – from plantings to comb-overs. When it’s restored the hair does not seem quite right (pictured). Often the geometry is the give-away, or the non-randomness. However, except for a few bad celebrity ’rugs’, who shall remain nameless, I rarely see a black man who has had his former follicle glory artificially restored. In contrast to white men, the approach is to cut it all off – summoning the ghost of Isaac Hayes. So, why does it make more sense for black men to try to hide bad hair rather than risk poor restoration?

If we back up, testosterone and its signaling to women works the same for all ethnicities of men. Attractive young men have longer, thicker hair. Aging men have thinning and/or graying hair, indicating less male youthfulness. Young women like young men and are less attracted to aging men, on a strict physical level. In response, old white guys hide the gray and/or purchase length and thickness at the Hair Club. Old black guys, similarly inclined, hide the gray by cutting everything off, and pointing to Michael Jordan. But there is a reason this works for black men. In the black male trick bag for getting sex there is back up - ‘the rap’.

The rap is the understanding and ability to speak to a targeted woman in such a way that she thinks more highly of you than your looks otherwise merit. So rather than spend money they barely have on surgeries and plugs, black men fall back on their raps, with verbal sexual gamesmanship. A dude may look like Kermit the Frog, but if the words out of his mouth sound like Billy Dee Williams, the black equivalent to Cary Grant, he will get sex. I knew white guys in college who struck bargains with certain black class mates to ‘learn’ how to talk to women. It seemed pathetic, until I watched it work for Orville from Turniptown. The real problem with the rap is that it is most often disingenuous – a ruse to get sex.

Now if what a guy wants is the most attractive females of his age range, even as he ages into his own diminishing attractiveness, it’s the rap that he must work on. This is really just accepting that women are both physical and verbal, unlike men. However, if what the guy wants is a young hot babe, he’s got to fool her into thinking he is younger, or stinking rich if she a gold-digger, neither of which is easy to slide pass your average hottie, with a discerning eye for such men.

So to answer my own question, there is no real difference between black and white men, except that Hair Club guys mostly want young and hopefully-hot women on their arms, while too many black guys just want women, of any age, that they don’t merit. Ignoring the Hair Club rap-masters, if a higher percentage of black men take the rap/ruse approach (and I believe they do), then we have yet another reason why black women have such a hard way to go in the mating game. If a man, of any color, simply wants his fair equal in a mate, then a shower, shave, and decent duds, along with honest dialog seems the way to go.

Interesting that you're going to tackle men's attractiveness. Here's a link that I left on the Black women and weight post as a counterweight to the OK Cupid findings, but I'll put it here again because you might find it useful going forward.

The traits that women are attracted to actually become MORE pronounced in men as they age (e.g. more money, more confidence, more status, etc). There is a point when the physical effects of aging will overcome those advantages, but it is much much later in men than in women.

The attractiveness of men's hair has little to do with youth, and is more analagous to a peacock's feathers. It's a way for males to stand out from the crowd to get the attention of females, while at the same time demonstrating that they have the social savvy to handle that attention. Most Black men have short hair and have rarely if ever had long hair. Since any advantage that hair provides to them is minimal, it's no big deal to shave it off. In fact it can be advantageous b/c a man who cuts his hair bald demonstrates self-comfort which is part of confidence.

Could it be as simple as black men just look better bald as a whole? Could it be that thin, pale, veiny skin stretched across (more often than not) a funny shape head is just not as easy of a solution

Anon 3:10, from all the various bald heads I have seen, I think you are biased. Are you saying that 'funny-headed' black men occur in lesser proportions?

It was the combination of the thin, pale, veiny skin and the funny shaped heads. That's just too much. Oh, and it is okay that you think I'm biased.

Look, white men do NOT look good bald, as a rule.

I'm white, and you can call me a racist if you want, but white men generally speaking don't bald well, and do not even get me started on the ones who purposely shave their heads.

Caucasian heads are usually oddly shaped, and I should know, because I have got your typical big, mis-shapen Caucasian bucket head. My husband is balding, and I love him more than ever, and I am not a fan of transplants anyway, but bald is not a good look for white guys.

Most men of color have nicely shaped heads, and look great shaved, or even balding. They have gorgeous skin color, and age better overall.

It is unfortunate that the larger skull required to house the more powerful Caucasoid brain is considered unattractive.

I also feel sorry for Tammy's husband. White women are the most spiteful, senseless, entitled, and ungrateful women on Earth.

"Black Men on Why They Do/Don't Trust Their Girlfriends To Handle Their Hair" Read it at http://wp.me/pC3Xj-cb